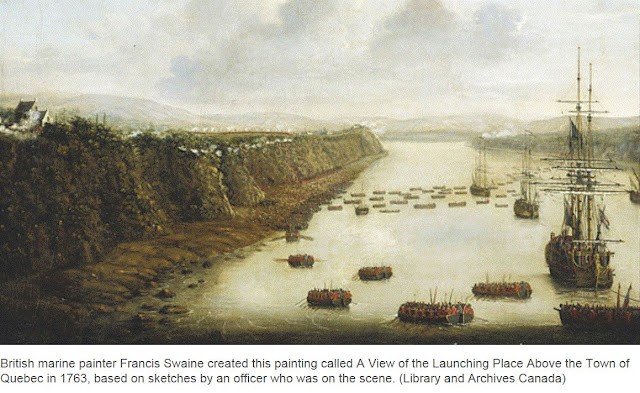 The Plains of Abraham.


It sounds so biblical.
The kind of place where there would be a lot of smiting
of foes while seven eyed lambs having seven horns
warn of the impending Apocalypse.


But I was so grateful someone long ago had the presence of
mind not to call it 'The Plains of Martin'.

The Seven year's War continued to rage in the New and Old Worlds
after the expulsion of the Acadians.


the ocean and there was only one country that 'ruled the waves'
in those days and it wasn't France.

They decided to keep their army in Europe and fight like the dickens.


They reasoned that when peace came they would trade some of

their newly conquered European possessions to get back what


they had lost in North America.


I'm sure that plan looked great on paper.


But in the end France had nothing to trade.


America died with him. 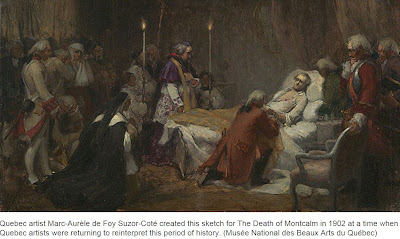 The British General, Wolfe, died too, but that didn't matter, he,
(supposedly), died happy because the 4500 British regulars had


But then the Brits made a BIG mistake.


ways, they sent them the bill for the war.


But the 13 colonies weren't happy about this.

Posted by The Dancing Crone at 8:59 AM

Within a few years, Ben Franklin was trying hard, without much success, to get France to help out with the American Revolution.

Another great post about an important part of Canada's history. In Quebec, the teaching about this period is much different; it's certainly a lot more hostile. Having spent most of my life there, when you hear about this period, you'd think it happened a couple of years ago.

Neat Google view of the Plains of Abraham! When I was in Quebec about 35 years ago, I made a point of visiting the P of A to see the spot for myself.

an interesting perspective from a different point of view! Makes me think about how much of history taught is tainted by the authors own beliefs!

Oh dear. I fear what comes next!