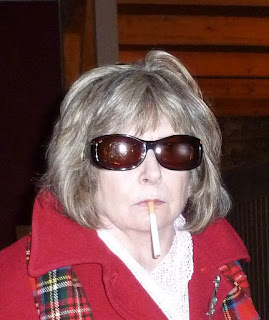 This week I was again able to catch up with Secnarf, last remaining member of the Rhinoceros Party of Canada and candidate for Prime Minister in the October Federal election.  Here is a transcript of the interview:

been in favour of an all female elected Senate.  I

would call it 'The Hall of the Matriarchs'.

Francie: So the lower chamber would be for men

Secnarf:   It would be for anyone who believes the

good behaviour of an elected member of the nation's

themselves, dragging their knuckles  across the

insults at other members without listening to a word

anyone else has to say.

Francie:  I see. And upon what would you base this?

Secnarf:  It was the Iroquois way.

Francie: But the Iroquois matriarchs were able to

control the warriors by withholding food.

Secnarf: Exactly. That is why the Hall of the

Matriarchs would have the keys to the House of

Commons.  Nobody would get to the cafeteria or the

bathroom until some work was done.

Francie:  Two votes for every woman, an elected all

female Senate, a House of Commons starved into

Secnarf:  It is the wave of the future!

It is a vote for a politician who looks
like a Cabinet Minister nobody
remembers anymore! And that's a
good thing.

Posted by The Dancing Crone at 11:19 AM No comments: