Wallenda on a Leash


and then the U.S. TV network that will carry the stunt live told him he has to be tethered to the wire.


Probably the same gang that defanged Tony the Tiger.


Anyway, I wouldn't have gone down to the Falls to watch him if he had gone without a tether.


And I sure as hell won't watch him if he is tethered.


He wasn't exactly planning to risk his life for the betterment of humankind.


It's all about money.


Money for Nick Wallenda and money for some U.S. TV network.


So by all means tether him.

Posted by The Dancing Crone at 7:45 AM 7 comments: 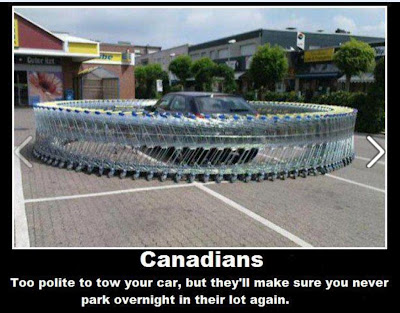 I stole this from "The Canada Party, America But Better"  website.

And yes I feel

Email ThisBlogThis!Share to TwitterShare to FacebookShare to Pinterest
Labels: The Canada Party

When I was teaching grade 6 a student came to me in tears one day because a boy had called her a 'ho'.


"He called you a hoe?" I asked, genuinely puzzled.


Now it isn't always easy to get information from a sobbing eleven year old but I did eventually figure out that he had said 'ho' not 'hoe'.


(You have to be a pre-teen to be able to hear the difference.)


I also learned that while the latter was still a tool one might use in the vegetable patch, the former was not one third of Santa's greeting anymore.


I mention this because I've had the old e-reader fired up recently and am in the process of reading Making Haste From Babylon, (Nick Bunker, Knopf).


It is about the social and economic factors in England that led to Puritanism and the sailing of the Mayflower to North America.


Trust me, it is a lot more interesting than it sounds.


Anyway, those Puritans knew a thing or two about insults.


No calling each other hos in the 16th century.

a usurer, a conjurer, a blasphemer, a fornicator, a fornicatrix,  or, (horrors), a swaggerer.

Now those are classy insults.


One can only hope that the rise and fall of our civilization cannot be tracked by the quality of the insults that we  hurl at one and other.


Otherwise some shit-for-brains-scuzzbag will be our next Prime Minister.

Posted by The Dancing Crone at 5:18 PM 8 comments:

Taking the Falls on Victoria Day 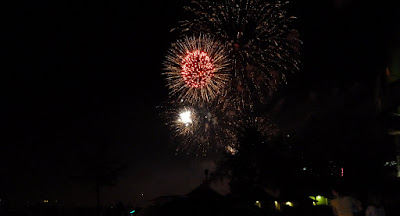 The fire works are always set off over the crashing water of Niagara Falls.

The tiny lights you see on the bottom left are on the American side.

so we've never had to come up with an answer.

And who cares anyway.

It's our long week-end 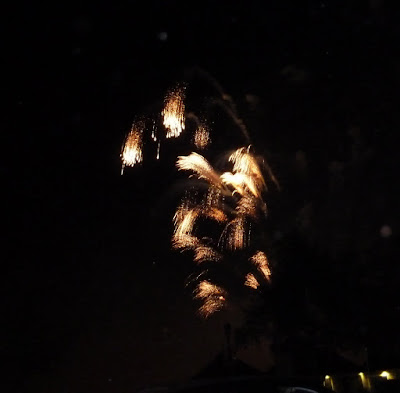 It wasn't a long display,

(they don't want patrons away from the casino for too long),

but it was one of the best I've ever seen. 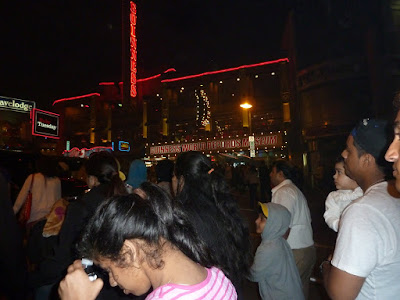 This is part of the crowd walking back up Clifton Hill after the  display was over. 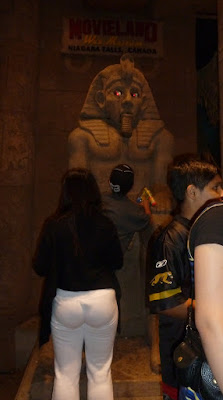 As you climb you will see many true Canadian artifacts

such as this fellow with his moving head and flashing red eyes. 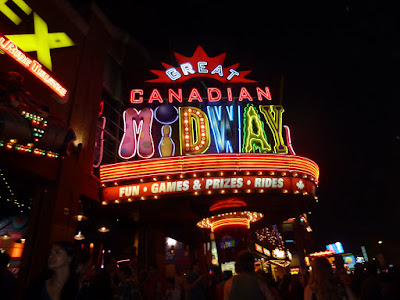 Of course this is where Canadians go for fun, games, prizes and rides.

And if you'd like to join us, well pony up my friend!

or whatever else you may have! 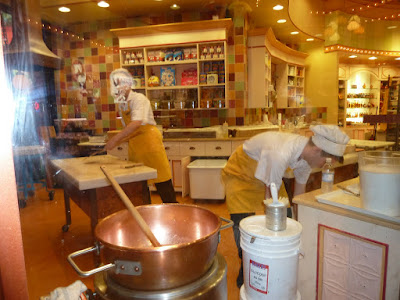 These guys work in a window

but this is Canada.

They are making fudge. 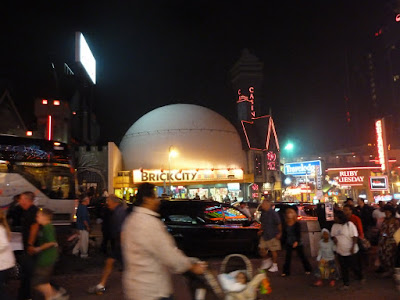 There is an open area at the top of  Clifton Hill.

Everyone in the world passes by.

It is a great place for people watching.

You can see the Casino tower at the top. 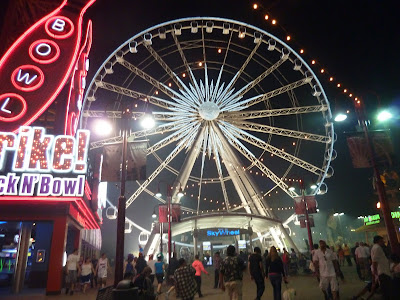 I'm sure you get a lovely view of the Falls

but I'm not one for heights. 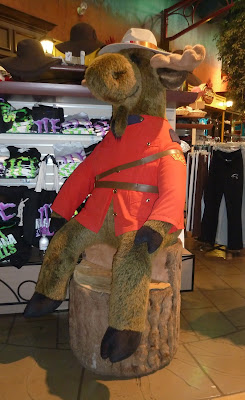 And of course there are moose in Niagara Falls.

but hey it's the Queen's birthday!

Hope you had a royally good long week-end!

Even though I love them, I can't wear opals.


And apparently, neither could Queen Victoria.

My mother would have walked across the burning Sahara at noon before she would let me wear her opal ring.


"Opals bring bad luck unless you were born in October," she'd say.


But the ring was pretty and because it was hers it was special to me,
so after she passed away I took it to the jeweler and asked if the old superstition was true.


"Oh no!" the jeweler laughed.


One day she was wearing an opal brooch  that came undone and exposed the royal bosom."


"How dreadful!" I said thinking of the onlookers.


Now I have to tell you that it was Movember and the jeweler was wearing a rather magnificent mustache.


Luxuriant and waxed to a fine point it was a sight to behold.

I suppose that was what made me decide to go ahead with my plan.


I mean if you can't trust a woman in a mustache, who can you trust?


I had the ring re-sized.


Six weeks later I was in an ambulance on my way to the hospital paralyzed with sciatica.


The next few months passed in a blur of excruciating nonstop pain and drugs.


Whatever they tell you, believe me when I tell you that Percocet does not come close to easing nerve pain.


The best that can be said is that I eventually discovered that if I took two Percocet and two gravol it  knocked me out for a few hours.


I never wore the ring again.


I've never had sciatica before or since.


But I don't blame Queen Victoria.


I'll be out watching the fireworks this weekend with everyone else.


I blame the jeweler.


It will be years before I trust another woman in a handle bar mustache.

Have a Happy Long Victoria Day Week-end everyone!

Posted by The Dancing Crone at 8:54 AM 7 comments:

The father of Victoria Stafford is not particularly well spoken and yet he has been the most eloquent person the country has seen in a long time.

Everyone involved in the murder trial of little Victoria 'Tori' Stafford, from the police to the lawyers, to the judge and jury, came face to face with an unimaginable evil,

but Rodney Stafford, the man most affected, the man who lost his daughter,


her father's words kept us all going,


made us believe that justice would be done.

After the verdict he did not curse Rafferty or McClintic.

He simply declared a victory for Victoria and for all children.

He is a good man.

Posted by The Dancing Crone at 8:05 AM 6 comments:

50 Shades of Gray, Yellow or Blue


You and/or your partner will need to wear something this summer while you read 50 Shades of Gray.


So make it a fascinator from Bombshell Blooms!


All you have to do is tell me the name of your favourite naughty/romantic book.
(blush, blush)


You can post your entry at the end of this blog or any upcoming blog,
or direct message me on twitter,
or on facebook
or e-mail me at francie.mcglynn@gmail.com.

The last day to enter will be  Victoria Day at noon.

THE PRIZE
You can choose one of these bee-yoo-tee-ful 'Blooms' as your very own and I will mail it to you wherever you live in the world. 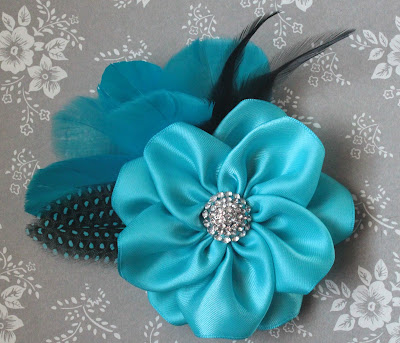 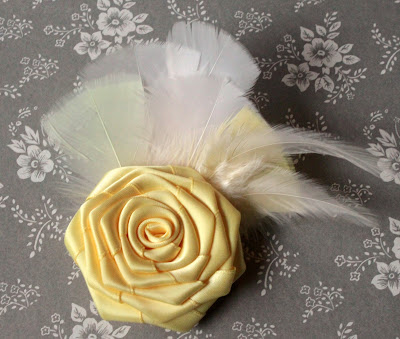 Bombshell Blooms are made by Amy who is the daughter of my oldest friend.

(I'm actually 6 weeks older than she is, but you know what I mean.  We've been friends since we were kids trudging to Sunday School in big heavy coats, white gloves and sailor hats.)


Amy has a world wide market for her Bombshell Blooms.

She sent me this photo of a rather elegant wedding in Australia.
The bridesmaids and flower girl are all wearing her fascinators. 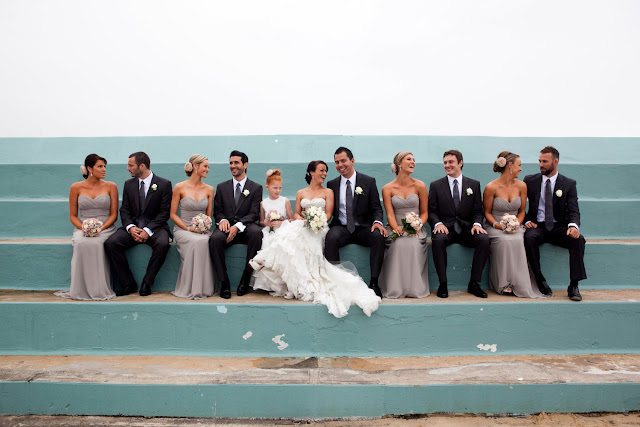 Posted by The Dancing Crone at 9:27 AM 2 comments: 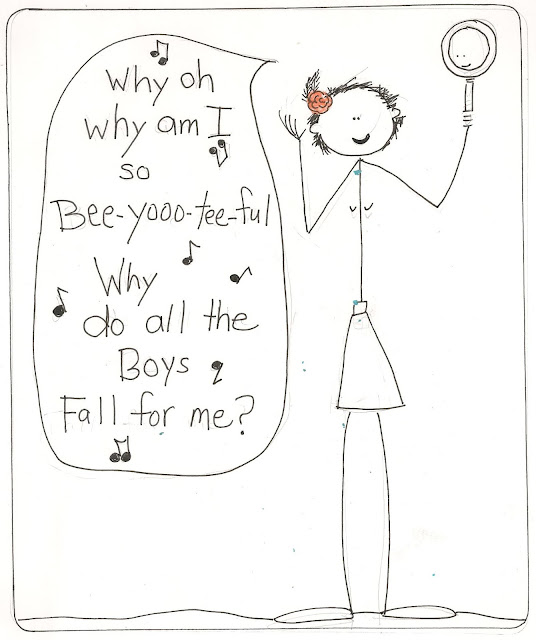 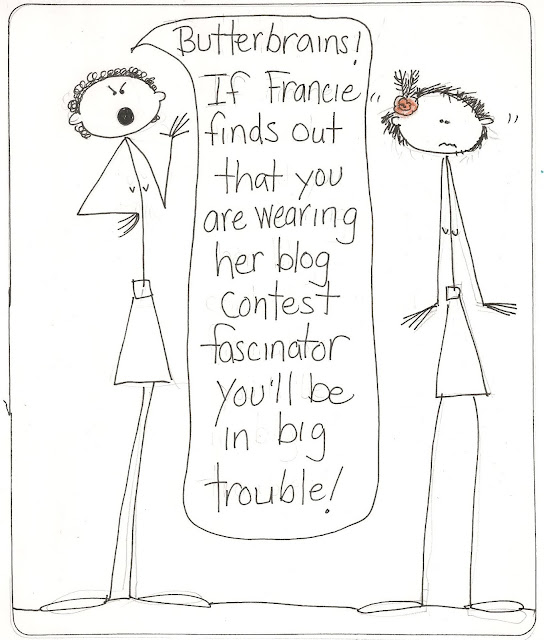 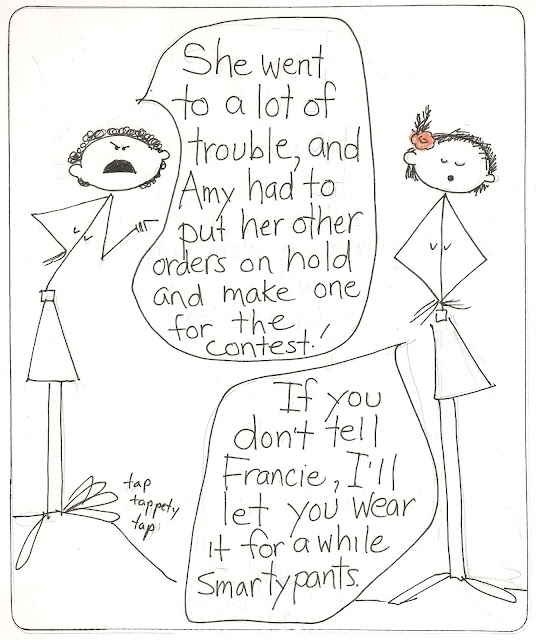 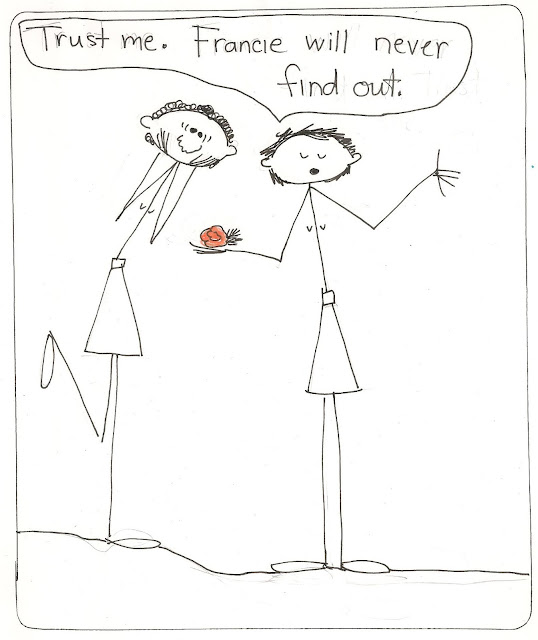 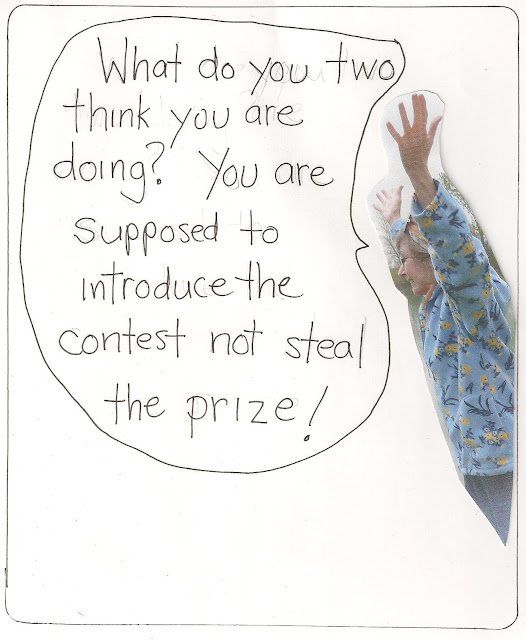 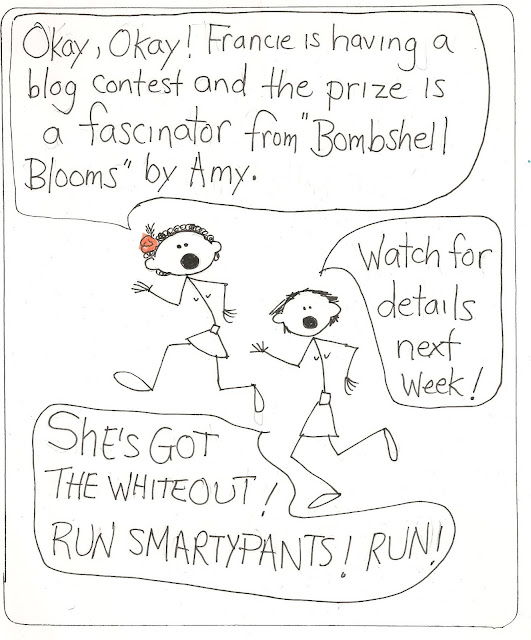 
A frail old man with a walker hitchhiking at the edge of a busy road caught my eye the other day.


I had just dropped Flynn the dog off at home and was racing towards the Y for my spinning class.


And the spy car squealed to a stop.


The old man started shuffling towards me.


I got out of the car and waved my hands at him.


"I'm on my way to the Mennonite Church down the road," he quavered cheerfully.


The passing cars were dangerously close to sending us both to the Mennonite Church down the road.

And not for lunch.


"Hop in," I said begrudgingly.  I was going to miss my class.


We had to spend a few nerve wracking minutes while he slowly folded up the walker.  I tossed it in the back seat and 'Henry' made like a tortoise and inched into the front.


Neither he nor his clothes had been near water for awhile but then I was wearing my gym clothes so for all I knew I was offending him too.


I sighed and started the spy car.


Suddenly, out of nowhere,  a cop car slid in behind me with all the lights flashing.


"Jeesh," I said.  "Henry, it must be illegal to pick up hitchhikers!"


"Why that's ridiculous!" said my elderly companion who was outraged at this assault on his personal liberty.  He turned to shake his fist at the police car.


I started to enjoy myself.


I was still laughing when the 12 year old police constable appeared at my window.


(Why is it I always feel guilty when I'm around cops?)


He looked at my new travelling companion.


Henry fished a wallet out from somewhere in his crumpled, smelly apparel and handed it to me.  I handed it to the Constable.

"Do you want me to take him?" he asked after he looked at Henry's Health Care Card.


I figured that Henry needed more help than I could offer so I turned to explain the change in plans but he was already out of the spy car shuffling towards his newer, fancier ride.


But some serious male bonding seemed to be happening as Constable Doogie Howser helped him into the cruiser.

He had already forgotten me.

It was just a brief moment in time when three lives from three different generations intersected.


But it affirmed that things in my little corner of the universe were unfolding as they should.


I drove away smiling.


To my spinning class.

Posted by The Dancing Crone at 1:17 PM 5 comments:


If you haven't been watching Mr. Deity this is a great place to start!

And you may want to watch any episodes that include Lucy, (i.e., Lucifer.)