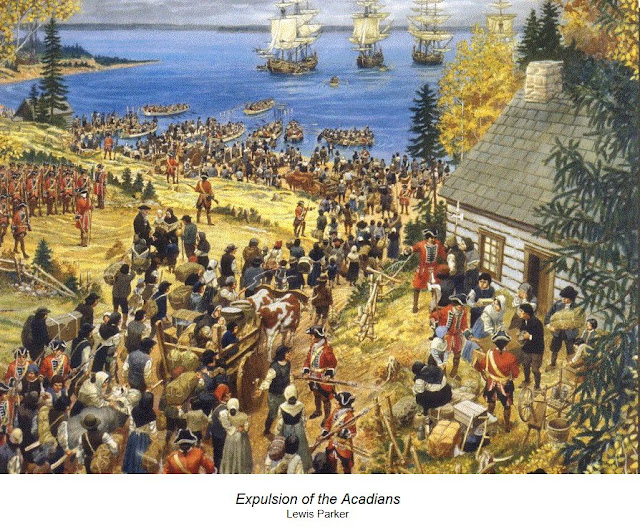 
As a matter of fact they rarely even dropped in for tea.
Usually they just pounded on the front door and rattled


their sabres.
They wanted one thing from the French in Acadia

- an oath of loyalty to the English monarch.

The Acadians said the best they could do was a promise
of neutrality.

The British gritted teeth under stiffened upper lips and

Then as luck would have it war broke out and the Brits found
200 armed Acadians in the first French fort they pulverized.


They gave the Acadians one more chance to swear loyalty.


And once again the Acadians refused.


By all accounts it was a dreadful scene along the beaches
as they were being moved out.

The men were often separated from their loved ones.
(Longfellow's epic poem Evangeline tells the story here.)

By the time the expulsion was over 15,000 had been
forced onto ships and away from their homes.

The original idea was to scatter them among the 13 colonies
where they would be assimilated but most ended up in Louisiana.

Posted by The Dancing Crone at 8:27 AM

Some didn't make the trip, though. I have friends in Nova Scotia whose Acadian roots go back to those days you describe.

You are right, Doug. Some escaped into the 'forest primeval' and some returned after the fall of New France!

Our loss was the Bayou's gain!

Thanks for the refresher course! I am embarrassed to say I didn't really think much about where the word Cajuns actually came from and only vaguely remembered the whole story!

And they're having a grand old time down in that beautiful area, and enjoying much better weather.

wish I knew this when I was in Cajun country!

I hope that one of these days you can tell us how we ended up with Cajuns in Louisiana and in your side of the world. I've read some of the story, but I bet you'll tell it much better ;-)

Hugs kindred..I so appreciate all of your wonderfully written posts..they are fascinating and intriguing to read and I enjoy them so very very much! A visit here is always a treat..and leave me with knowledge, more thoughts to ponder and conjure great comments from bloggers ..which I love reading here! Wishing you a beautiful day!
Victoria

I wish you had been my history teacher! I find this stuff so fascinating...not when I was younger though!! :)

Hi Francie! I'm just reading back through your historical posts. My roots in Nova Scotia go back to the 1670s. I was born just a few miles from Grand Pre, and it was one of the earlier historical events I learned about. I'm loving what you are doing!