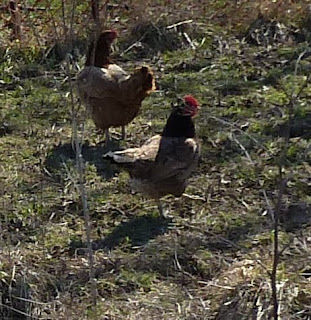 When I was in Teacher's College my parents kept free range chickens for awhile.

It was, in general, an all round unpleasant experience.


Who knew that fresh eggs are so poopy?


And collecting the eggs was a major ordeal.

The roosters used to attack me with talons, beaks, wings and if they'd had them I'm sure they would have used tiny little assault rifles.

The worst thing about keeping chickens, however, was seeing the weakest bird being pecked - sometimes to death.

When it comes to attacking the vulnerable it seems that we aren't far removed from those chickens.

Someone is deliberately targeting a certain class of people while they shop at Wal-mart.


(Get it? Tacky store = worthless people.)

Someone is going out of his or her way to take pictures of the poor, the sick, the uneducated and the mentally or physically disabled when they are at their worst and posting the photos online.

Pictures of people who soil their pants in public...

Pictures of morbidly obese people who have to wear clothes that don't fit.

It is supposed to be funny.

This kind of thing marginalizes and degrades people who cannot defend themselves.

People who have as much right to dignity and privacy as the photographer.

If you come across these photos, speak out.

Because they are a labour of hate.

Sounds like the person who's posting those pics has a big self-esteem problem. Terrible what people will do to demonstrate that someone else is worse off than they are.

Re: the roosters, how would we react if someone was stealing our offspring?

@Debra Oh I didn't go to a site, these things are bing e-mailed around and there is actually a cruel music video on youtube which turned up on facebook this week - that was the last straw for me.

@Doug ha ha, hell those roosters didn't care about the eggs, they were defending their hens. Sex, sex, sex, that's all me... I mean roosters think about.