To everything there is a season ...
Ecclesiastes 3:1
Spring is a time to tend to graves.
It is a time to do right by the guardians who have weathered the storms of winter. 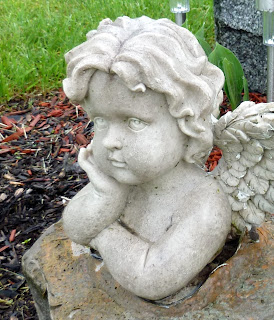 This little fellow looks as if he's been waiting an eternity for someone to come and tidy him up.
I've seen students wear that look of resignation when they've been waiting for something necessary but mildly threatening to happen - like a dental screening.
Maybe boy angels don't like their spring baths.

Faeries originated in pre-Christian times and  aren't very common in the graveyards I've visited.
Not surprising because faeries are wild and magical creatures, capable of stealing a person's soul.
This one has a bit of a zombie-ish look but seems friendly enough.
I found it sitting on the ground in front of a weeping angel.
Pagan and Christian. Two very different attitudes towards life in the other world.
Someone wanted to make sure that all of the spiritual bases were covered, I suppose. 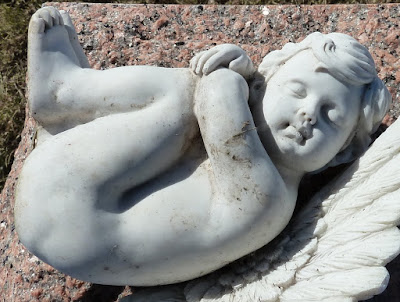 As a rule I don't touch another family's guardians, but this little creature looked so vulnerable I just couldn't leave her on the ground.

I imagine that the spring sun will wake her up.


Or a quick scrub under the faucet if the family gets to her before the warm weather does. 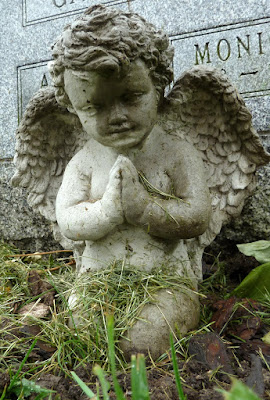 "I'm awake! I'm awake!"
It looks as if she heard me coming and quickly got into position without having had time to wash her face or brush off the flotsam and jetsam of winter. 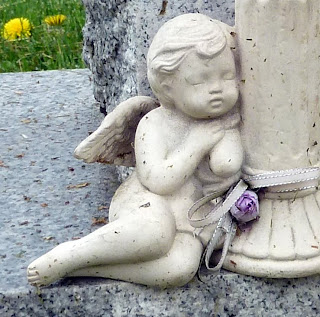 Not as carefully formed as the last two, but on the other hand she is much younger.

Almost an embryo angel, or one just out of the shell.


She looks chilly, as if she should be snuggled under the wing of her angel mother instead of already on the job. 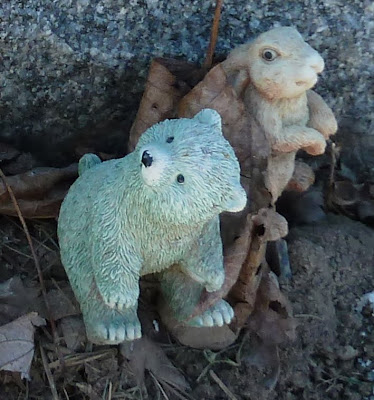 I seem to have startled this sweet blue bear and timid furry bunny.
They are a poignant reminder that Death comes not just for the old
I imagine them sitting on the child's window sill and watching over the crib the way they now watch over his or her resting place.
Blessed are those who mourn
For they shall be comforted ...
Matthew 5:4
It is extraordinarily peaceful here and although I have found that time doesn't lessen the pain, I hope it has brought some measure of acceptance.
***

Posted by The Dancing Crone at 8:39 AM

An interesting exercise in photo journalism.