A Love Story From North of Sixty 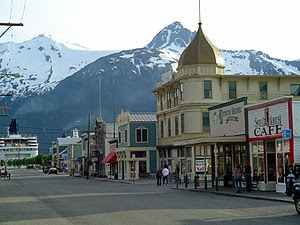 Image via Wikipedia
Alaska is a remarkable place. It is full of beautiful snow capped mountains, fresh air, turbulent history and an assortment of the most interesting people you could ever hope to meet. When I was teaching in the Yukon I was so taken with the forty-ninth state that on one of my holidays home to Ontario I told my family that I hoped to find an Alaskan to marry so that I could stay there.

My brother, who'd had a hockey scholarship to a New England college for four years, and was therefore an authority on all things American, snorted and said, "And what are you going to do when he decides that he wants to move back to Muncie, Indiana?"

A few years later during the early summer I was driving from Whitehorse over the Top of the World Highway to Skagway, Alaska. I was going to take one of the Alaska State ferries down to Vancouver Island.

Much to my surprise, because I was in the middle of nowhere, two big hitchhiking men suddenly appeared in my line of vision.

In the north you do not leave anyone standing on the side of the road.

The younger one got in the back and the older one climbed in beside me. It turned out to be a father and son team from New Jersey who had spent a few weeks together hiking in the Alaskan wilderness.

The father and I talked for hours as we headed into Skagway. We got along so well that I was actually sad to say goodbye to him when I dropped them off downtown and headed to the ferry terminal.

I drove my car onto the ferry, shaking my head at the way things go in my life.

Just before the ferry hove away from the dock I was leaning against the railing, staring at the water feeling sorry for myself when I felt someone come and stand beside me. I looked up into the rugged face of my hitch hiker.

"I should come with you," he said gruffly.

For a second my knees went weak, I swooned and my mind was suddenly full of images of a little house with a white picket fence. I saw dogs, maybe even kids and it was all happening in...

"No you shouldn't," I said hastily.

I practically pushed him down the gangplank.

"But have a great trip home to Muncie!


I waved goodbye and really enjoyed the rest of my trip.

Posted by The Dancing Crone at 8:34 AM