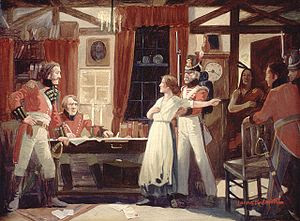 To say I was shocked when I read Christina Blizzard's article, "Liberals Balk at 1812 Memorial", Sept. 25/10, St. Catharines Standard, would be an understatement.

In case you didn't get a chance to read it during this busy weekend, she wrote that Paul Miller, MP, Hamilton East & Stoney Creek, asked the Provincial Legislature to consider moving the remains of our soldiers and American soldiers who fell during the 1813 Battle of Stoney Creek. He suggested they be reinterred in a more dignified setting.

No money is forthcoming.

Then Ms Blizzard reminded us that this is the same Liberal government that gave a cricket club $1,000,000.

So let's recap what we know.

The terrible war continued for another year.

The frozen bodies of women and children were found in the snow drifts after the American burned Newark in December of 1813.

We retaliated by burning Buffalo.

Thousands died on Canadian soil at the Battle of Fort Erie in August of 1814.

Those were desperate times  and pivotal in the building of our nation.

The remains of the men who died during the conflict in Stoney Creek are scattered across Battlefield Park. Bone fragments are coming to the surface as the soil erodes.

There is no money to bury them properly.