A Different Kind of Scary 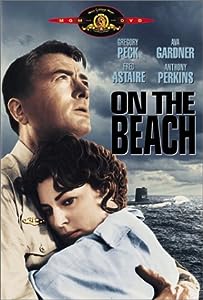 Cover of On the Beach
I f you are the type of person who would be more frightened by seeing someone in your backyard in a hazmat suit than you would be by someone with a crazed look and a chainsaw, then you may want to check out the old 1959 movie, "On the Beach", this Hallowe'en.

It is set in Australia after a nuclear conflict between the U.S. and Russia. The radiation fallout has killed everyone else and the Aussies know it is only a few months until they too will die.

As the movie opens people are living like there's no tomorrow because there isn't.

As luck would have it, the American submarine that has the handsomest man in the world as captain, (Gregory Peck), wasn't nuked. It docks in Melbourne and of course Captain Gregory meets a beautiful woman, (Ava Gardner), and they fall in love.

While the doomed romance unfolds, the Australian government is busy issuing suicide pills to families.

This is not a feel good movie.

But then the impossible happens. Morse code messages start coming from somewhere on the west coast of the U.S. They are gibberish but Gregory Peck and his band of not so merry men have to investigate. Gregory and Ava say their gut wrenching farewell and the submarine departs.

I'm not going to tell you what they find when they reach North America.

Did I mention this is NOT a feel good movie with a happy ending?

If you like old movies and scary end-of-the-world flicks, this might be the thing for you on Hallowe'en night.


On the Beach, 1959
Directed by Stanley Kramer
Based on the novel with the same name written by Neville Shute
Posted by The Episcopagan at 8:23 AM

Email ThisBlogThis!Share to TwitterShare to FacebookShare to Pinterest
Labels: nuclear war, On the Beach, scary movies