A Cold and Clammy Dread 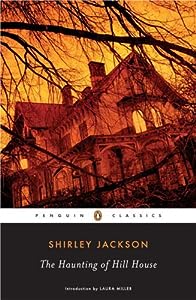 Did I get that when I was twelve?

I must have sensed it because "The Haunting of Hill House" by Shirley Jackson, scared the hormones right out of me.  I'm sure it is the reason that I didn't reach puberty till I was forty.

It so terrified me that after I finished it I became afraid of the book itself. It sat on the bottom of my closet and to this day I have no idea what happened to it.

Probably returned itself to the library.

Anyway, feeling brave I took myself off to the library this week and actually found the book still there. The hard cover version is bluish-gray.  It sits so unobtrusively on the shelf that I missed it the first time I looked.

It is classified as a "psychological ghost story".

I didn't know that when I was a kid. And it wouldn't have meant anything to me anyway. When I picked it up I probably thought it was just another 'Nancy Drew Investigates the Haunted Mansion' type book.

But it wasn't Nancy Drew and I got so sucked into the story I couldn't stop myself from reading it. I mean when she gets into bed and feels the hand ...

Let's just say it was years before I could put my own hands under the covers.

A best seller in its day, it has been largely forgotten, pushed aside by sexier writers such as Steven King and Dean Koontz.

But if you are looking for an old-fashioned scare this Hallowe'en, one that leaves you with 'a lingering clammy dread', (reviewer Laura Miller), it's down at the library waiting patiently...

Posted by The Episcopagan at 5:33 PM