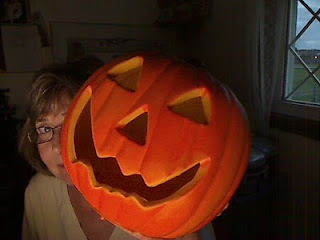 It's me, with my blog review and upadates for October - from pumpkins squares to Mrs. Russell Williams...
X RATED PUMPKIN SQUARES
What can you say about pumpkin, chocolate, and Antonio Banderas all being in one place?
Answer: YUM!

SEX, DRUGS BUT NO ROCK AND ROLL

Prostitution is legal in Canada, but all of the stuff that goes on around the sex trade is illegal, i.e., soliciting, running a brothel, etc.

Evidently most Canadians think that 'the oldest profession' should be legalized and regulated.

Unfortunately the decision which should have come at the end of October has been postponed.

No decision will be announced until the end of November.

GROWLS FROM A CYNIC

Like anything I say is going to change the insurance industry.

CONFESSIONS OF A WITCH IN THE PUBLIC SCHOOL SYSTEM

A set of Christian parents accused me of promoting witchcraft one year when I was teaching grade six.

What a lot of hocus pocus.

It was nice to have a chance to say thanks.

This was the first of my 'Scary Things' blogs.

I heard this urban myth about the headless boyfriend at the same time I heard the one about the couple that went parking in the town where the one handed murderer was on the loose.

When they got home they found a hook hanging from the door handle.

A DIFFERENT KIND OF SCARY

This 1959 end-of-the-world movie still chills me.

BRA BURNERS ON THE LOOSE

"Why Do We Fund These Bra Burners" was the dumbest headline that I'd seen in ages.

The writer was angry because a group of female separatists in Quebec are partially funded by our tax dollars and they refuse to condemn the Islamic veil. (I know, I know, making the connection is a stretch).

So let's ignore the separatist thing for now and talk religion.

We need to be very careful about the whole issue of Muslim head garb.

If some Muslim women are oppressed, it isn't because of the hats they wear.

Freedom is an important part of being a Canadian.

November is a good month to remember that.


A COLD AND CLAMMY DREAD

I didn't dare reread "The Haunting of Hill House" but I did find a little about the author.

Shirley Jackson actually called herself a witch and cast spells now and again.

She also lived in a big, happy house full of kids where she ate too much, drank too much, smoked too much and died young from, you guessed it - too much.

More tales from the crypt about me and GM and the spy car.

Speaking of the spy car it is almost time for snow tires.

You should see the poor thing in her winter attire, (ouch).

The car is small and the tires big. I feel as if I'm roaring around North Pelham in one of those monster trucks.

This was the hardest blog to write this month.

I still don't know if I did the right thing.

I say things to myself like, "What if Mary Elizabeth Harriman reads your blog and throws herself into the Ottawa River? Won't you feel sorry then?"

Well if she does I will feel sorry. Really sorry.

That's why I don't know if I was right to blog about her.

My other problem about the blog is that I usually support women and two of my readers took me to task for not understanding that she is an abused woman.


She is the only one who knows for sure and she isn't talking.

The other two women in this horrific story can't talk.


I really enjoyed putting this one together although Picassa wasn't working and it was a struggle to download the pictures.
Thanks, Monika, for my favourite comment of the month.

(Not that I didn't like the others.  I love comments, the good the bad and the ugly!)
A friend might be thousands of miles away but she is always kept in the cockles of your heart.
Okay, I have to look it up...
Cockle: the innermost part of one's heart or feelings.
Exactly!

See everybody in November!

***
Note:
Oct. 30th is my bloggiversary. (I didn't coin the term I read it in someone else's blog.)
My NP Journal is one year old!

Posted by The Episcopagan at 7:13 PM

Thanks Kathy! You are also in my heart cockle.