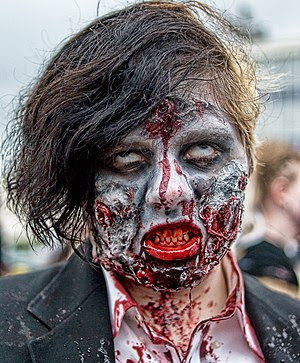 Up until last year I didn't know much about Zombies.


I knew they were dead people who chased live people but I didn't know why.


So when the movie 'Zombieland' came out and it was billed as a comedy, I talked anther retired teacher into going to see it with me.


I figured that I would become knowledgeable about the zombie phenomena and have a good laugh at the same time.


"I Love Lucy" reruns are funny.


However I did learn why zombies chase humans, (they eat people), so on one weird and sick  level, it could have been classified as a learning experience.


Not one I intended to repeat.


However while browsing through Tumblr the other day I happened to see an article that asked whether zombies could ever really exist.


This is where you may want to stop reading.


The science guy whose blog I follow, replied to the question as to whether zombies could ever really exist by saying that while dead bodies cannot be reanimated


it is theoretically possible that one day the rabies virus might jump to a flu virus.


Science Guy went on to explain that if that happened, rabies would start being passed from person to person by coughing, sneezing, etc., just like the regular flu.


Which would lead to many dying, contagious,  violent, brain-inflamed, zombie-like people lurching among us tearing us limb from limb and spreading the new plague.


Another reason to get the flu shot and avoid raccoons.

Posted by The Dancing Crone at 8:48 AM