The Cost of an Executioner 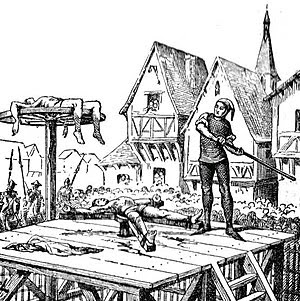 Last year I posted a list of ten things that I hoped to  hear or read about during my lifetime.


This last week-end, one of the things on my list came true.

Because he is Canadian and we do not have the death penalty, he wasn't executed.


Protected during his incarceration, he wasn't  murdered by another inmate.

He died of natural causes.


As natural as cancer can be, I suppose.

The child torturer/rapist/murderer is gone.


The tormentor of the families of his victims is gone.

Long years of incarceration should have been a terrible punishment for him, but by all accounts he thrived in prison.


And that isn't right.

But I'm grateful to be living in a country where the state does not have the right to execute any of its citizens.

Posted by The Dancing Crone at 1:35 PM

Well, if there is a hell, he's burning in it now.

i have seen cancer patients die ... he suffered ... sometimes having patience brings about what is due to the perpetrator ... he had to confront his own death in a most painful way ... being a psychopath would have made that confrontation all the more painful and unbearable to him ... he finally had the experience of what he did to his victims

It is impossible to forgive such evil. I wish I knew less about what he did to those kids and I wish there was a way to fix whatever is wrong with people like him.

who said anything about forgiveness? ... it is not my place to forgive ... that is for the families of the victims to decide

i think you did not understand my previous comment

Barb, I assumed you meant 'what goes around comes around'. Didn't mean to imply that I thought he should be forgiven. I wonder what was brken in him and if he was capable of stoping himself. I hope someday people like that can be fixed.