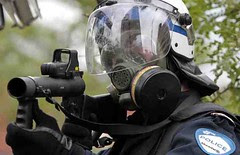 In 1989 I was living in Notre Dame de Grace, Montreal.

One day I witnessed a rather violent police take down.  It happened right outside my first floor apartment.

It looked like the kind of thing you see on TV police dramas, but it felt very different.

The police came out of nowhere and ran faster than I knew that anyone could run.

I could smell their fear.

Neither I nor any of my neighbours went outside until it was over.

The police had a dangerous job to do and in the interest of the safely of the whole community no one would have expected them to consider the rights of any curiosity seekers who wanted to watch and/or make comments.

I guess that is the way I've been feeling about events that transpired at the Toronto G20.

The police had a job to do and in the interest of the safety of the world leaders and the whole city I wouldn't have expected them to worry about the rights of the people who either went back downtown out of curiosity or never left after the organized protests ended.

But losing your right to be somewhere during a critical situation is one thing, being beaten, arrested, imprisoned,  etc. for your foolishness is another.

I am changing my mind about the need a full scale inquiry.

There are just too many unanswered questions.

Too many pictures that defy explanation.

The saddest thing was the report of an elderly, frightened homeless man who got caught in the crowd and found himself arrested and detained.


Let's get to the bottom of it.

Posted by The Dancing Crone at 5:54 PM

Glad to hear you're coming around on this.

I'm hoping that this isn't a "Say it airn't so, Joe!" expereince.

I will recommend anyone looking for Business loan to Le_Meridian they helped me with Four Million USD loan to startup my Quilting business and it's was fast When obtaining a loan from them it was surprising at how easy they were to work with. They can finance up to the amount of $500,000.000.00 (Five Hundred Million Dollars) in any region of the world as long as there 1.9% ROI can be guaranteed on the projects.The process was fast and secure. It was definitely a positive experience.Avoid scammers on here and contact Le_Meridian Funding Service On. lfdsloans@lemeridianfds.com / lfdsloans@outlook.com. WhatsApp...+ 19893943740. if you looking for business loan.