Some Thoughts About International Women's Day 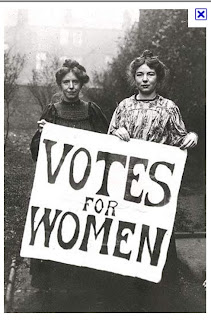 In 1911 International Women's Day was marked for the first time on March 19th
in Austria, Denmark, Germany and Switzerland.
In addition to the right to vote and to hold public office,
women demanded the right to work and the right to vocational training. 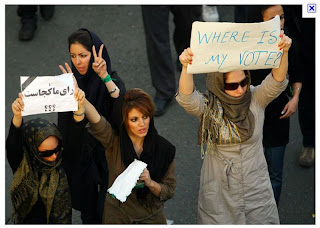 It is difficult for those of us who have always been able to vote
to believe there are places in the world where women have no voice.
This is Iran.
This is bravery.
This is the country where a government sniper shot a young woman through the heart
during a protest march.
The world watched her death on YouTube. 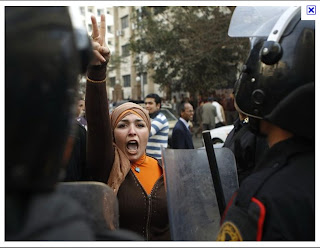 Egypt is a country where 91% of the women are subject to some form of genital mutilation.
Recent events have been hopeful.
This young woman calling for change was on the street with thousands of other women. 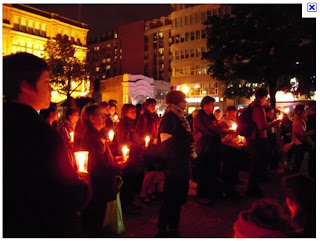 This demonstration in Montreal was for the
600 missing or murdered Aboriginal women in Canada.
Were any of those women my students?
They were in someone's class, someone's family... 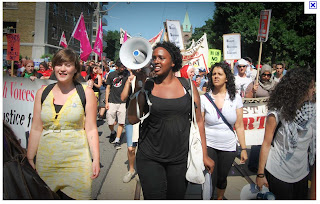 Women had a voice at the G20 Summit protests in Toronto.
I know the message to
think globally and act locally
has been said ten bizzillion times
but now more than ever it is do-able because of 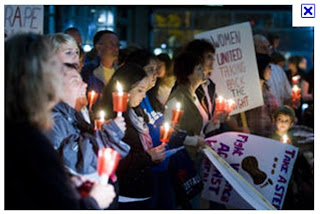 Women, men and children rally at the
'Take Back the Night March' in St. Catharines last year.
Take Back the Night began in the US in 1975
and the first march took place in Canada in Vancouver in 1978.
This march to end violence against women is now held around the world.
*
What can you do?

If you belong to an organization that doesn't accept that

women are different but equal,

then talk change.
You are more influential than you think.

Vigilantly guard the rights that women have in Canada.
Under no circumstances,
ever,
no matter who tells you otherwise,
should Sharia Law gain a toe hold in this country.
Times are changing and not for the better.
The gap between the rich and the poor is growing.
Political parties tend to listen to big money.
Unions that used to have money and clout
and represented the interests of the middle and working classes and women
are slowly dying, becoming ineffectual and voiceless.
So vote.
Support politicians who are willing to speak for and protect women and children.
Tell our stories.
Support women here and in other places.
Keep in touch.
note: I took all the photos from the Internet, most were posted by fliker although the last one is likely from the St. Catharines Standard.

Posted by The Dancing Crone at 5:28 PM