I had a phone call this week letting me know that my driver's licence,
and  the insurance and ownership for the spy car, were at a Pelham golf club.

I don't play golf and, truth be known, didn't even know they were missing.

The explanation involved a gas station and cupcakes.
(You don't want to know.)

Anyway, on the up side,
it meant I had to go 'home to Pelham' if I wanted my stuff.

The Whisk and Ladle 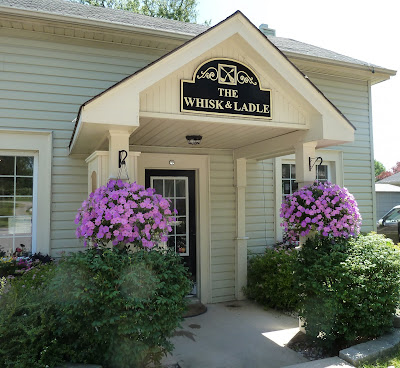 I parked the spy car right in front and inspected the sidewalk sign. 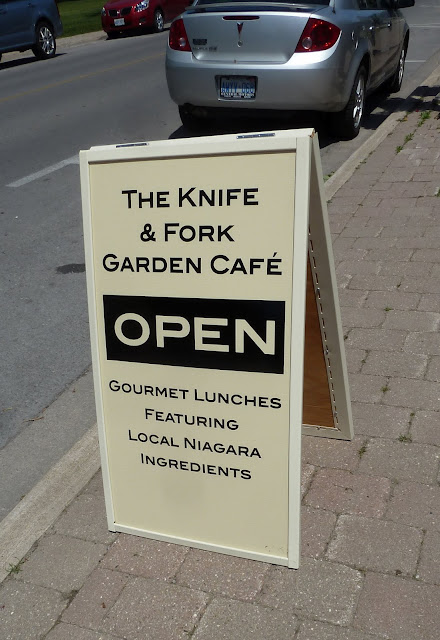 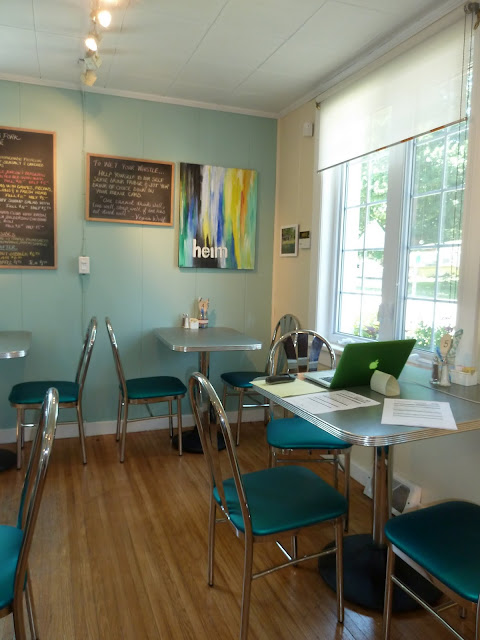 The interior, which used to sell kitchen utensils,

has been turned into a diner! 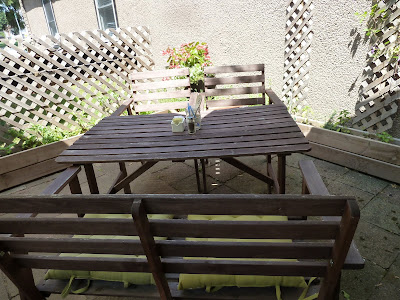 It was a nice day so we decided to step into the Knife and Fork Garden Café. 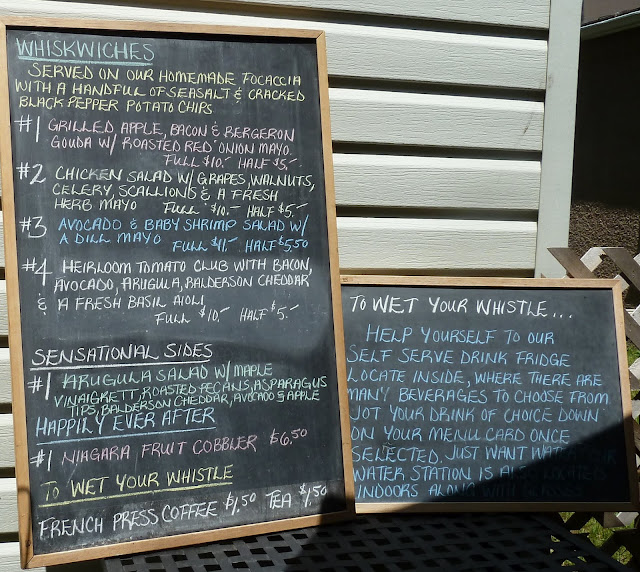 The menu was displayed neatly on chalk boards. 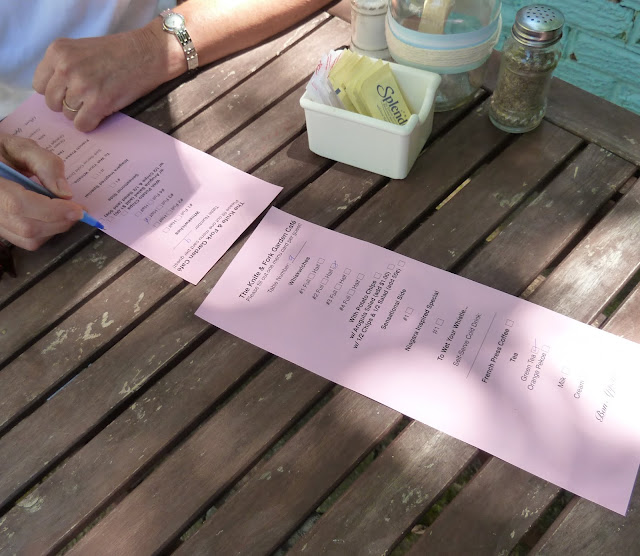 Placing an order was difficult.

The menu was full of fascinating choices

AND there were also three mouth watering specials to consider.

But there are times in her life 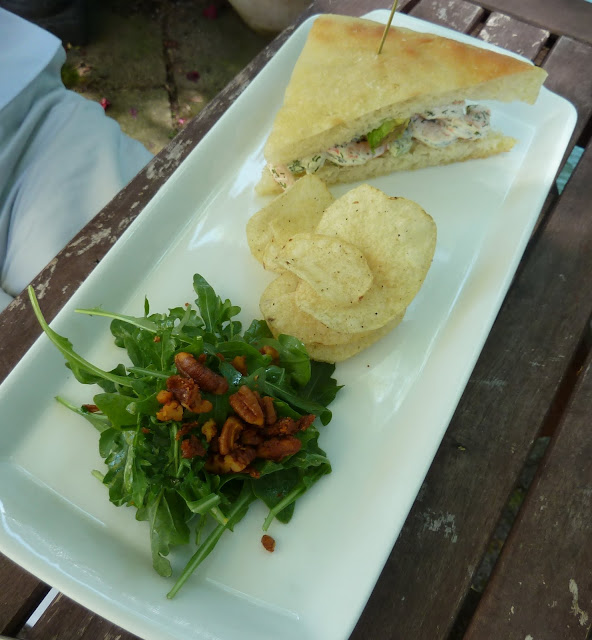 My friend, Janet, ordered #3 - the avocado and baby shrimp
with dill mayo on fresh focaccia bread.

She also ordered a side salad.

She said it was 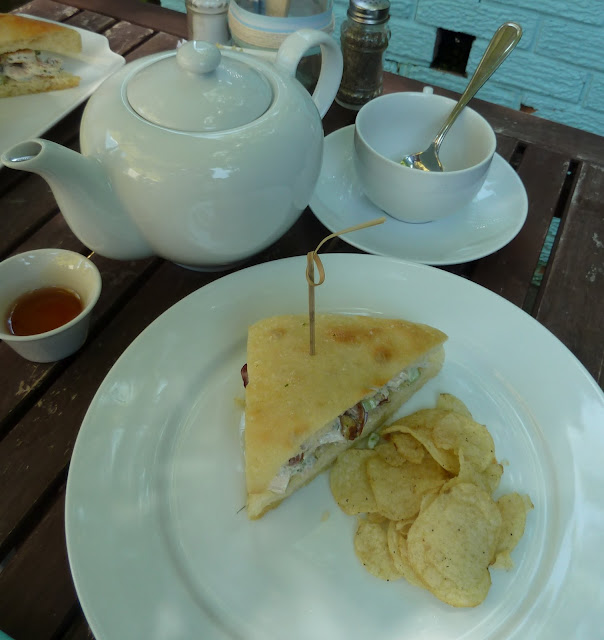 I decided on #2, the chicken salad sandwich with

and the water was hot

AND the waitress brought me some honey when I asked for it.


I wish I could describe the delicate taste sensations.

Everything was light, fresh and savory!

It was definitely a 5 YUM lunch.

We both ordered a half sandwich

I would have ordered a whole sandwich and taken half home. 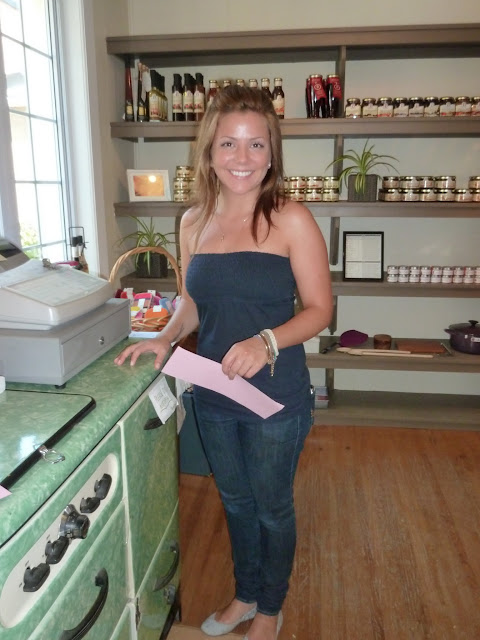 I think one of the nicest parts of the lunch was the atmosphere.
This was our cheerful waitress. 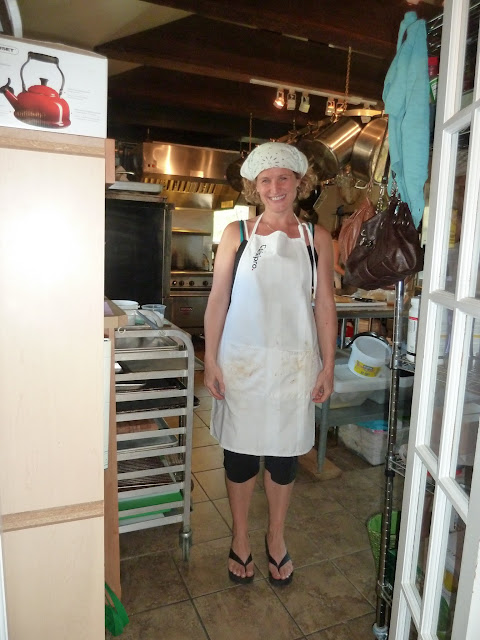 This is Ruth, chef and owner of the

I just love this picture!

One of the most charming portraits I've ever taken. 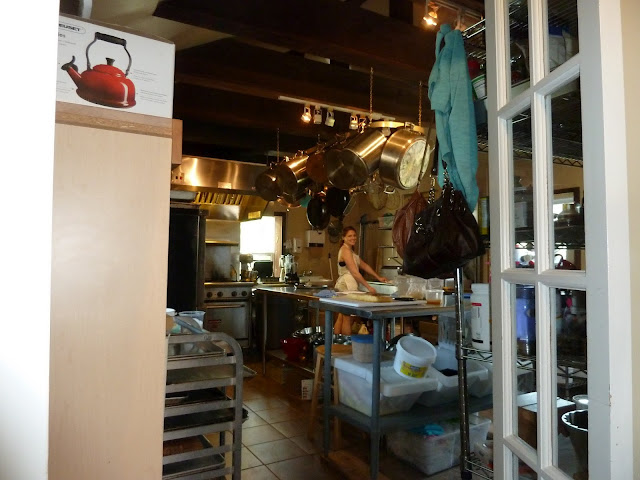 Even when I peeked into the gleaming kitchen,

the young woman working at the stove smiled at me. 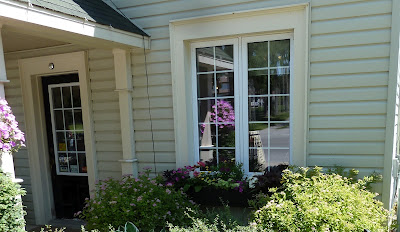 The Whisk and Ladle

is so much more than just a place to get a gourmet meal.

You can buy prepared meals,

have a party catered

and even  arrange a private cooking class party with some friends!

and I am the  one restaurant reviewer you can trust,

You need to eat here!

Posted by The Episcopagan at 7:58 AM

Everything looks wonderful, we will have to try this!

It looks delightful! Wish I lived closer, I would definitely go there to eat!

What an inviting little restaurant - love the decor! Your lunches look very yummy & the staff are adorable :) I'd definitely pop by if ever in the area.

It looks very good, and I think pleasant staff make all the difference.

i definitely would visit if i lived closer...looks wonderful

I love it, Francie. These quaint little places are always so much fun to dine at. And what I also like is that the plates of food are just the right size. I lose my appetite when I receive a plate that is overloaded. It scares me to death -- all that food!

About the books:)they are fantasy , but read more like medieval history (NO VAMPIRES).http://en.wikipedia.org/wiki/A_Song_of_Ice_and_Fire
The books are a little dark but i feel they depict real life..nobody is perfect and even the so called hero's have their dark side. I guess i should be glad i didn't test like one of the despicable, evil characters in the book lol, although they don't sound as boring .