My father told me that in the days before D Day the masses of men and equipment that were to cross the channel were confined to camp.


But my twenty year old father and his buddy, the same one he got caught in a fox hole with months later, (The Weapon That Won the War in Europe), managed to sneak out to meet up with a few girls they liked.


They were caught when they returned and given KP duty.


The  British Officer in charge still wasn't pleased with their shenanigans though.


He inspected the potatoes they were working on and declared the peels too thick.


"Wasting the King's rations" he called it according to Dad who was still offended sixty years later.

They were sentenced to 10 more days of KP duty.


Dad said they didn't care because they knew they would never serve their sentence.


And he was right. 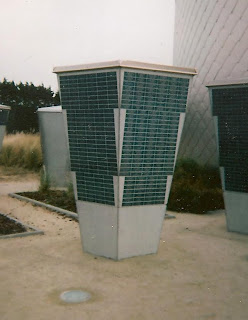 The Canadians landed on Juno Beach.

There is a Memorial Centre there now.

This is one of the cairns outside the centre.

Dad's name is on it.

The picture was taken by his great nephew Kory Howe.

Posted by The Episcopagan at 7:47 AM

I couldn't get the linker thing to work. Anyone know if there is a special thing you have to do to link back to one of your own blogs?

Jeez, that's a helluva way to get out of KP duty -- going to D-Day instead!

(I have linked back to my own posts just the same way as linking to another blog. Just type the full url in the box when it pops up.)

Thanks goodness for D-Day I guess, or your poor Dad's fingers would have been worked to the bone...! This is a fascinating piece of history. They were so young - can't blame them for trying to grab a bit of happiness - no matter the consequences.

We cannot begin to imagine the horror they witnessed, and so young.

Wow, what fascinating history, Francie! And your father was only 20 at the time?? So young to be going through things like that. If you have more stories from that period from either of your parents, you should share them. I bet they would be very interesting!

I am glad D-Day happened and he did not have to waste the King's potatoes no more... I completely sympathize with your dad... I would be brooding still too and telling the King to do something not pleasant with the potatoes ;-)