Things didn't go exactly as I planned on Saturday.
First, I was late arriving at Queenston Heights for the reenactment of the famous 1812 battle.
AND every last one of the 15,000 attendees stood directly in front of me.
I didn't see a thing.
As far as I knew General Brock might have been able to dodge the American sniper's bullet this time. 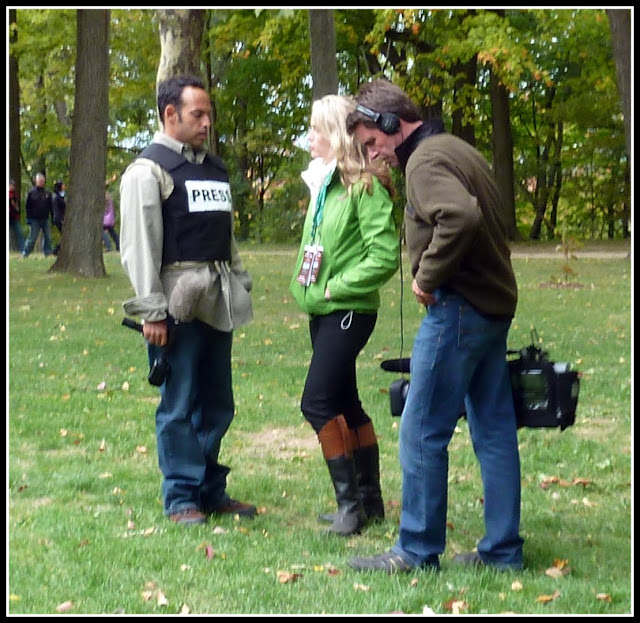 The only thing I saw was some of the cast of 22 Minutes suddenly materialize in from of me. 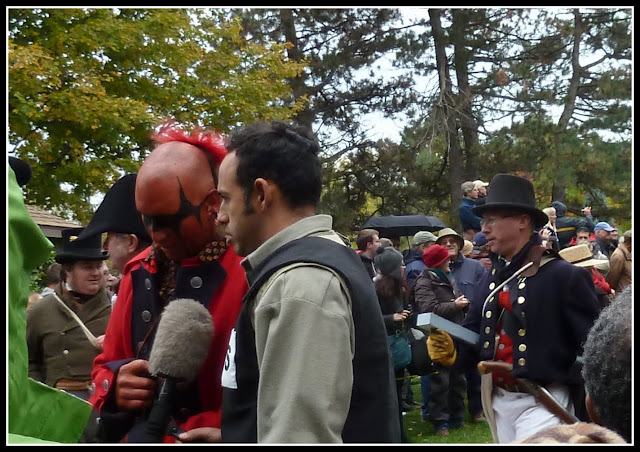 If they use any of the clips, they will be on TV Tuesday night. 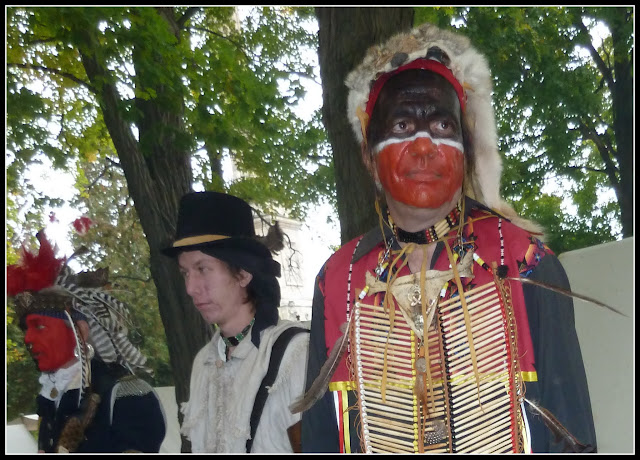 Then, when I was chatting up these handsome fellows my camera battery died and it started to rain. 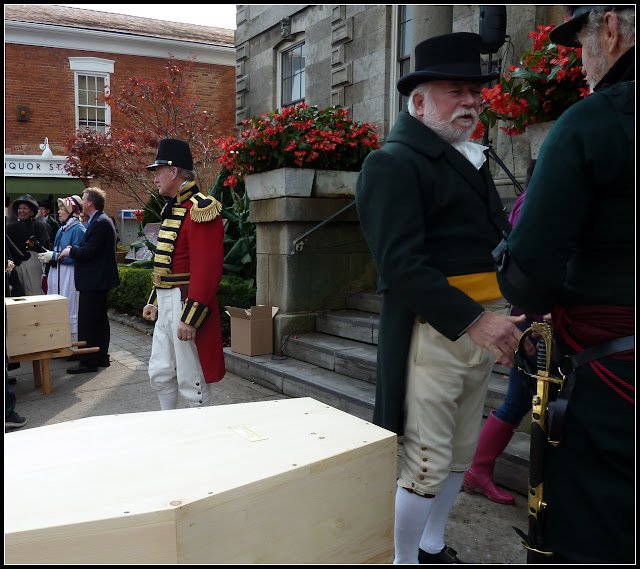 The nexr day was better.

I arrived in front of the Niagara-on-the-Lake Court House early.

General Isaac Brock's body was lying in it's coffin beside the body of  his aide-de-camp, Lieutenant Colonel John Macdonnell. 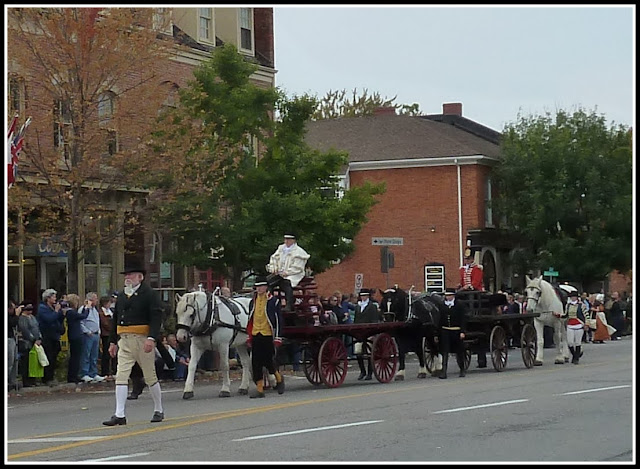 There were a few speeches about the War of 1812 and how nice it is that we are friends with the Americans now, then two horses pulling flat bed carts pulled up in front of the coffins. 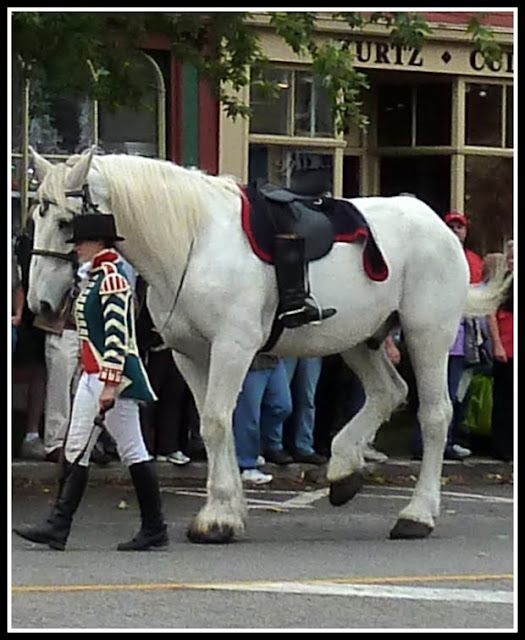 (Okay it isn't the real Alfred.  There are horse reenactors too.) 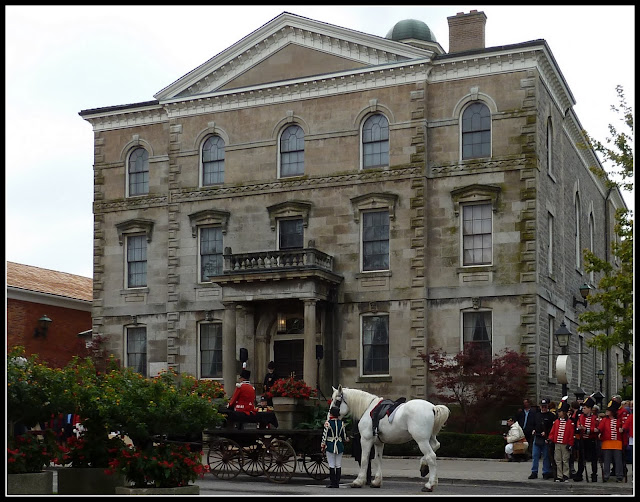 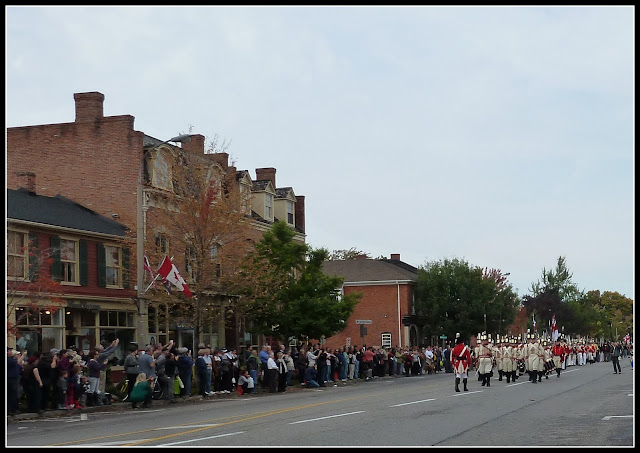 We heard the sound of flutes and drums as the funeral procession marched towards the Court House. 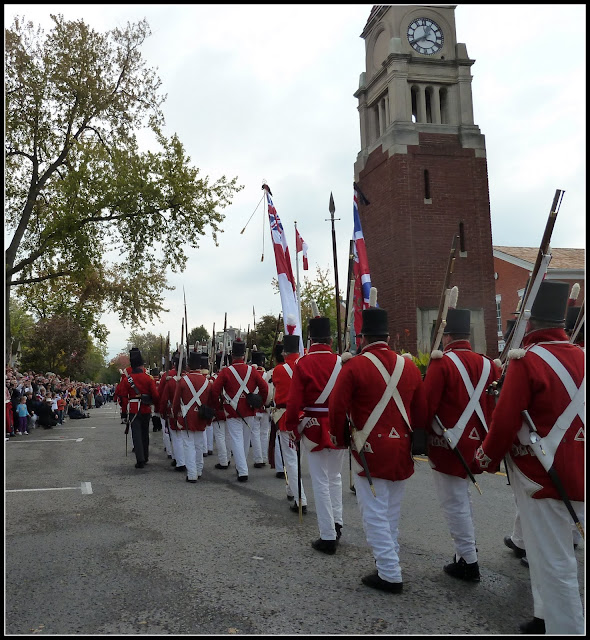 British soldiers marched in the lead. 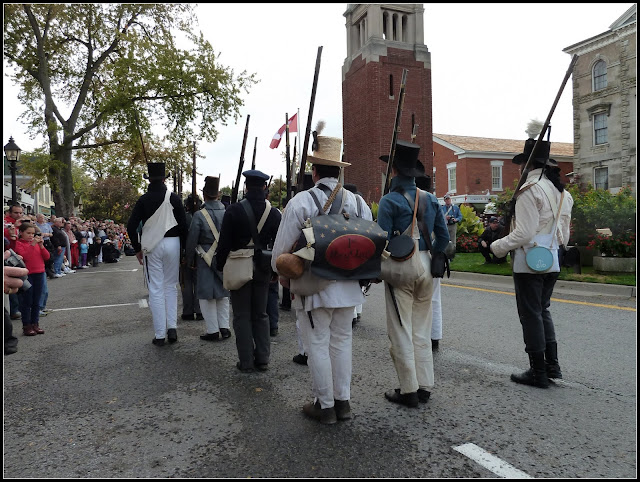 Many of us in this area had ancestors who fought in the Militia. 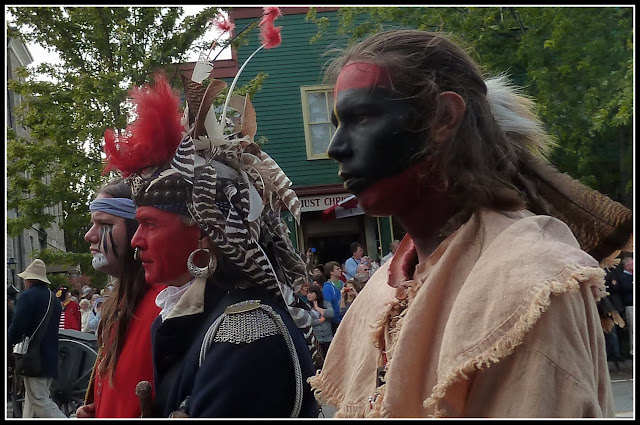 200 of his warriors were in Brock's funeral procession. 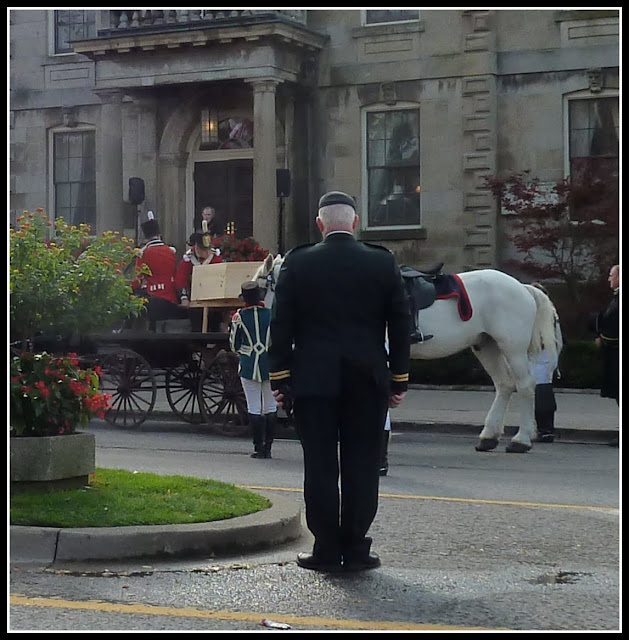 After the warriors passed, Brock's casket was carefully loaded onto the cart.

Notice the modern military presence.  When one of the reenactors in the uniform of a British officer walked by the soldier he saluted and the man saluted back.

It was very eerie.

As if we'd passed through a portal in time briefly. 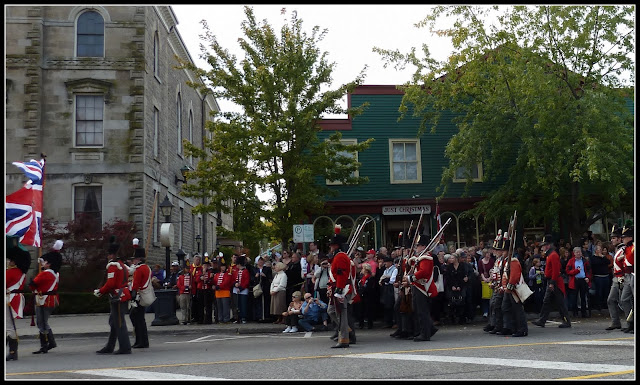 Finally the women, elders and children walked to the funeral to honour General Brock.

"I well remember the day General Brock ... was killed.  I was at the funeral. I remember hearing the muffled drum and seeing the soldiers standing in line and the bands marched between the two lines of soldiers as the body was carried ... to Fort George and was buried there.  While the American flag at Fort Niagara was at half mast."


It was an amazing week-end.

A job well done by reenactors from both sides of the border.

Posted by The Dancing Crone at 8:25 AM

Great photos! Too bad you missed out on a good view at the battle. But you made up for it at the funeral!

wow super pictures, would have loved to have seen this...And Shaun Majumder, wow !!

I have to tell any readers who come along that I wass not able to find any evidence that said Tecumpseh was not at Queenston Heights. It bothered me because no one said he was either. I asked one of my former students to ask her father who is a history teacher.

This is her amazing reply to my query:

"I can field this question myself actually ;)
The native leaders at Queenston Heights were John Norton and John Brant. If I'm not mistaken, Tecumseh was marching towards Fort Wayne in Indiana with 400 warriors in mid-September 1812 and would have been no where near Queenston at the time of the battle. A great many apocryphal facts have been added to the mythology of Queenston Heights (Alfred is a great example, although Brock was gifted with a horse by the name of Alfred, no one knows if the horse was ever shipped to him. No one knows if the horse was at the Battle of Queenston Heights, or if he died where the commemorative statue now stands. Brock never mentioned the horse by name in any of his writings. In fact, stories of Alfred did not surface until several decades after the battle). If Tecumseh was anywhere near the battle, I'm certain there would be mention of him (accurate or otherwise) in the legend that has built up over the last 200 years."

Thanks so much, Aelia!

Wow, beautiful photos, Francie! It felt so real...that's quite eerie. The costumes must play a huge part in that. I don't watch much TV, but I'll have to check out 22 minutes to check for this.

You never know, Francie, it could be the real Alfred. Maybe, with the veil being thin and all because of Halloween, he jumped across and here he is ;-)

I love all the costumes! So neat :)