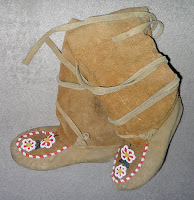 I taught with an older woman named Marion when I was in Dawson City, Yukon. Her husband, Joe, was retired and their children were grown. We often gathered at their log house during the long nights. This is a story she told us.
In the 1950s Marion didn't teach school, she stayed at home with their two small children. The family lived on the outskirts of a tiny, isolated Yukon settlement.
One winter day Joe and a co-worker came across the frozen bodies of two men and their dog team in one of the rivers. They had fallen through the ice. Because some of the indigenous people in the Yukon believe that the soul wanders the earth forever if the body is not buried properly, Joe and his friend laboured long and hard to cut the corpses free and tether the stiff bodies to their vehicle.
But what to do with them? Because they had died in unusual circumstances the deceased had to be sent to Whitehorse before they could be buried, but at 40 below zero and with hundreds of kilometers of gravel road to travel, it was easier to say that than to do it. There were no funeral homes or morgues in the small community and the bodies couldn't be left outside for animals to gnaw.
Joe brought the frozen cadavers home and put them in his garage.
He was called out somewhere in the middle of the night and Marion was alone with her babies when she heard Bang! Bang! Bang! coming from the garage.
Terrified, but determined to protect her children, she pulled on her parka and mukluks. She said she was sure their visitors had thawed and were trying to get into her house. But when she opened her door she heard the men harnessing their dog team and a few moments later she heard them mush on down the trail.
The bodies were sent to Whitehorse the next day for autopsies and eventually returned to their community for proper burial.
Was it a dream? A post partum hormonal disturbance? Or did Marion actually hear the spirits leaving on their final dog sled journey?
I don't know - and Marion and Joe are both gone now, too.

Posted by The Episcopagan at 7:18 AM