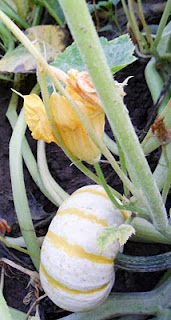 Last week I went tromping into a muddy field in North Pelham looking for the third sister. When I got to a likely spot I parted the huge leaves and peered along the ground.
It didn't take long to spot sister squash. I quickly snapped her picture as proof, (see above), and then I high tailed it back to the road in case the farmer came along and thought I was a vegetable thief.

In the Iroquois legend of the Maid of the Mist, Lelawela goes to her death over Niagara Falls in a canoe laden with corn, beans and squash because the three sisters were sacred sustainers of life.
If you aren't familiar with the legend, in a nutshell, it goes like this:
The people were sick and dying. It was decided to sacrifice the chief's beautiful daughter, Lelawela, to appease the Thunder God, Hinam.
Lelawela went willingly to her death but as she paddled over the edge of the Falls one of the sons of the Thunder God fell in love with her and caught her before she hit the rocks below. She promised to live with him in the Spirit Kingdom if he would tell her why her people were dying. He told her that an evil serpent was living in the Niagara River and poisoning the water. He allowed Lelawela to go and tell her people.
The people were so angry they caught the serpent and tied its head to one side of the river and its tail to the other. After it died the curve of its body became the brink of the Horse shoe Falls.
Great story, eh?  A story with a lesson because the poison is back in the Niagara River and its from the serpent called 'Industrial Waste'.
The people need to get angry again.
Anyway as this the last of my three sisters blogs* I thought I'd pass along a recipe that includes all three of them.
THREE SISTERS SOUP

2 cups (19 oz. can) corn kernels
(I used the kernels from two left over cobs of corn cooked the day before)
2 cups chopped green beans
(processor or blender or by hand)
2 cups cubed butternut squash
(I used sweet potato squash because that is what I had on hand)
1-1/2 cups diced potatoes
2 tbsp. flour 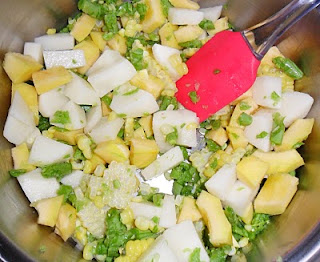 In a large pot combine corn, green beans, squash, potatoes and 5 cups of water. Bring to boil Reduce heat, simmer, covered for 1 hour. Mash all vegetables in the pot with potato masher. Blend the flour and butter together and stir into soup. Cook another 5 or 10 minutes stirring occasionally. Add salt and pepper.


Garnish with a bit of shredded cheese. 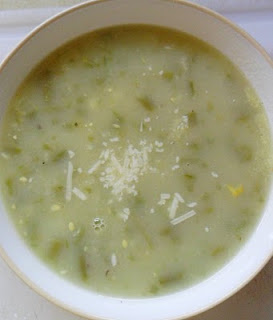 This is a great soup for a chilly, autumn day!


* This is my last blog about the three sisters.
I will, however,  be blogging about pumpkins at a later date!
Posted by The Episcopagan at 9:02 AM