In the early days of the earth, Corn was so pleased to be able to feed the people that she asked the Great Spirit if there was anything else she could do to help humanity.

The Great Spirit considered her request and eventually formed a beautiful doll out of the husks of the corm plant and gave it to the Iroquois children. The doll's face was so lovely that as the children passed her from village to village, all of the people commented on her beauty.

The Creator is not pleased by vanity and told her to be more humble. The doll agreed to try, but one day when she was walking by a river she saw her own reflection and stopped to admire herself.

In anger the Great spirit sent a screech owl down to earth and the owl swooped into the river and stole the doll's reflection away. The doll was never again able to see her own face.

*
To remind their children to think of spiritual and community values, rather than of themselves, Iroquois corn husk dolls continue to be made without faces. 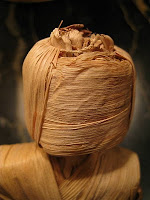 The second sister, Corn, arrived in Niagara this week and the corn is particularly tasty
but while I was reading various versions of the corn husk doll legend
I came across this sobering Iroquois prophesy.
Very disquieting when you consider the terrible oil spill off the coast of 'turtle island',(North America).
Something to keep in mind as we enjoy the corn harvest this year.

Tears ran down the old, old, woman's cheeks, for she could see far into the future.


'Corn is sacred, everything that grows is sacred,' she said.
'But I warn you, there will come a time when the sons of your sons will forget this. Then hunger and sorrow will return to the world.'
She shook her head. 'It will not end until - unless - their grandchildren learn once more this lesson - the only lesson that is worth remembering: how to love and respect the Earth.'

Posted by The Episcopagan at 4:29 PM