Last April was cold, wet and stormy. The purple martin house that stood on this property for thirty years came crashing to the ground during a particularly violent storm. Unfortuanately one bird was caught inside the house and died.  (Catastrophes in North Pelham 5/14/10)
The other seven birds seemed to be in shock and stood on the ground staring at the house for hours. They didin't even react when I approached them. It was terribly sad. They stayed around the site for several days but by the time the weather had cleared and the brand new bird house was up they seemed to have disappeared.
I was worried they wouldn't be back.

But this photo was taken this week. I counted over twenty of the cocky little guys swooping and buzzing around the bird house. They are having the time of their lives, chirping loudly to each other, terrorizing the cats and gobbling up all of our mosquitoes. (I've read that scientists say they don't eat as many mosquitoes as people think they do, but I can tell you - they eat enough.)

In the late afternoon they take off for Lake Ontario where they have their big feed high above the water and then at dusk they get back in time to dive bomb the cats, Squeaker, Bonny, Claude and Martha Stewart as they head out on evening mouse patrol.

Martins are a type of swallow. They winter in South America. The males are black with a purplish sheen while the females are lighter. They are a clear marker of the changing of the seasons and that is probably why I like them so much. I await their arrival anxiously in the spring and I'm always saddened to see them leave in the fall.

But in between their arrival and departure, during these hot, muggy summer nights, they are a source of endless joy.


Francie's Instructions for the Care and Raising of your Martin House 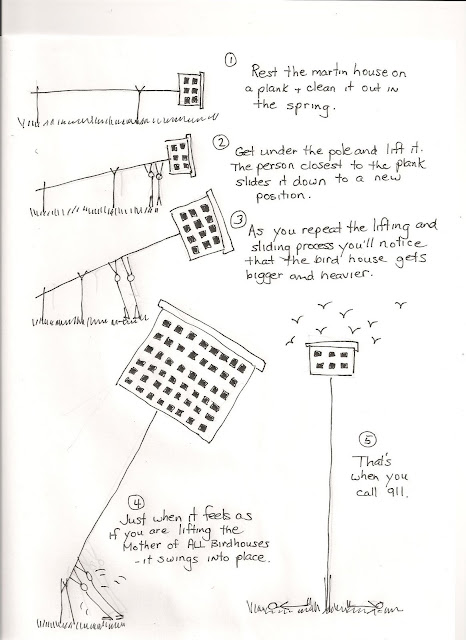 Posted by The Episcopagan at 8:46 AM