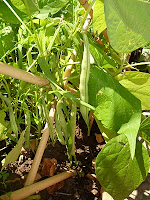 The earth began when Sky Woman peered through a hole in the heavens. She was pregnant and lost her balance and fell through the hole to the water below.
The animals saw her coming.
They quickly took the soil from the bottom of the sea and piled it onto the back of a giant turtle so that Sky Woman would have a soft landing.
Today we call this Turtle Island, 'North America'.
After Sky Woman landed she gave birth to a daughter.
When her daughter grew up she fell in love with the West Wind and became pregnant by him. She died while giving birth to twin boys.
Sky Woman mourned for her daughter and then buried her in the earth on Turtle Island.
Out of her grave grew three sacred plants—
corn, beans, and squash.
These plants, known as
the Three Sisters,
are precious gifts from the Great Spirit, and provided food for her people, the Iroquois, and later, for all of humanity.
***
The First Sister 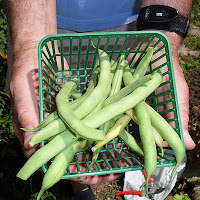 These beans are from the garden that belongs to my brother, Mark. 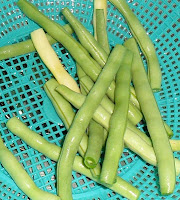 He doesn't use chemicals so all I needed to do was rinse them when I got home.
I steamed them and added butter,
and a little wild rice, and a little salad and a little cold smoked salmon.
Oink.
*
Posted by The Episcopagan at 9:24 PM