An Apology to the St. Catharines Standard 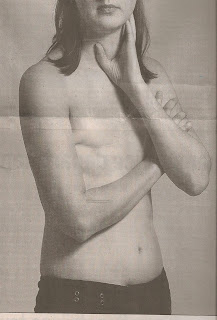 A person's shadow is made up of the socially unacceptable


personality traits that s/he represses or keeps hidden.


them that is so hateful.


That list of characteristics is your own shadow personality.

Even countries have shadows.

On the surface Canada is a haven of justice
and über politeness.

the G20 riots in Toronto, the reputation for viciousness that

our international hockey players have earned


or the government's disinterest in the 600 missing
aboriginal women.

It is healthier to acknowledge the shadow
as a part of who you are.

But it is a painful process.


When I saw the image of  young breast cancer survivor
it triggered the fears that I don't acknowledge.

The fear of cancer, of its treatment and
ultimately
the fear I have of death.
.


I did not want not want to be confronted by it,
not then,


not over my evening cup of tea.

We experience strong emotions and then we label them.


I labeled my reaction to the image incorrectly.


And hard as  it was to look at it,
it was exactly what I said it wasn't.


It was a community punch in the
jaw to cancer.


My apologies to the St. Catharines Standard.

Posted by The Episcopagan at 11:22 AM

I'm sure this photo has been a growth experience for a few people. You were brave to examine your reaction to it, Francie. It's not an image anyone would feel neutral about, I suspect.

I admire and respect you for really giving this some thought, Francie. Most people have a knee jerk reaction to things and never truly take the time to look at things from different perspectives, which usually gives us insight into ourselves. I suspect that many people feel the way you do about this image.

Well thanks Martha and Debra. My mind works better when I write things down. There's a connect between my hands and my brain that doesn't exist between my mouth and and my brain. I could never have figured out what the problem was if I had tried to talk about it. Blogs are good for the verbally clumbsy.

What an interesting post. I had never heard of a "shadow personality" but had noticed several years ago that the very things I despise in others are the very same things that I fear/loathe in myself, the very things I combat/keep reined in.

I didn't know it had a name.

Francie, this series of posts on the SCS picture is so honest and brave! Writing helps me sort out things too. It is not easy to confront our fears, especially of mortality. It's so difficult to think about life as we know it as "ending." When you've accumulated decades everything suddenly seems closer, and life even more precious. Thank you for being so open and truthful. I am so thankful I found your blog!