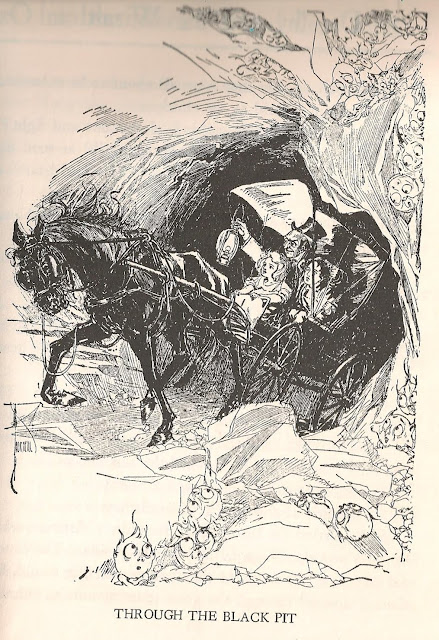 ﻿
Dorothy and the Wizard in Oz

Chapter 4  The Vegetable Kingdom,  Chapter 5  Dorothy Picks the Princess,
Chapter 6  The Mangaboos Prove Dangerous  Chapter 7 Into the Black Pit and Out Again

Dorothy and the Wizard discover that the Mangaboos are non-human vegetable people that grow on large plants.


They are taken to a garden by the Mangaboo Prince to observe the planting of the dead sorcerer.


While observing this practice they happen to notice that the next royal ruler is ripe and ready to be picked.


Not realizing what his captives have seen, the old Prince tells them to prepare themselves as they will soon be put to death.


Dorothy and the Wizard escape and pick the ripe Princess from the plant upon which she is growing, in hopes that she will spare them.


But after she takes over and sends the old Prince off to be killed and planted, the new Princess decides to sentence Dorothy, the Wizard, Zeb and the animals  to death by forcing them into the dreaded black pit.


The Mangaboo vegetable people are all adults.


The children grow as the fruit of a rather sturdy plant and do not come to life until they are picked when they are adults.


"On some of the bushes might be seen a bud, a blossom, a baby, a half-grown person and a ripe one; but even those ready to pluck were motionless and silent, as if devoid of life."


Dorothy, a child who is seen and heard, doesn't fit into this world.


Consequently she, the Wizard, Zeb and the animals are pushed into the  black pit.


(In our world, the place where complete freedom dies and where a child learns to conform, i.e., school.)


They find themselves on a dark and frightening path but it buys them some time.


"It isn't a bad road," observed the Wizard.


"... it is dark; but we have our lanterns to light the way, so I propose we start out and discover where this tunnel in the mountain leads to."


And the reader breathes a sigh of relief knowing that time is the only vehicle through childhood.


As the chapter ends, much to their surprise, they emerge out of the darkness into a beautiful countryside.

Posted by The Episcopagan at 8:56 AM

Email ThisBlogThis!Share to TwitterShare to FacebookShare to Pinterest
Labels: anallyzing Oz, Dorothy and the Wizard in Oz, the Oz series, The Wiard of Oz

I have definitely missed out not reading these books!

Such imagination :) I'm really enjoying your re-telling of these tales! Like Tracey, I feel like I missed out not having read them.

One of the most wonderful and surprising finds in the Oz stories is how many there are ~ I had no idea when I was preparing for this event.
Loved visiting ~ thanks!
♥Sharon

Francie, I am enjoying the read so much!

I always wonder how an author can come up with such incredible stories. Talk about imagination! I'm reading your posts and thinking that I've really missed out by not reading these books.

Wow...this is totally intriguing...thanks for sharing this gem..pure magic! Wishing you a sparkling day..and wkd ahead!
Victoria