Bringing on the Wizard 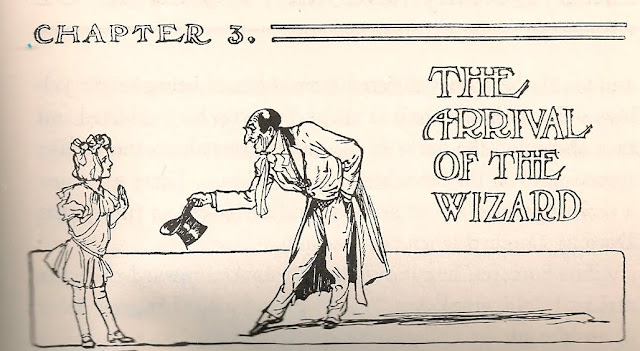 Dorothy and the Wizard in Oz

Dorothy, Zeb and the animals continue to fall towards the centre of the Earth. When they land the inhabitants accuse them of causing the rain of stones that damaged their glass city. They are taken to the House of the Sorcerer.


The Wizard of Oz arrives in his hot air ball balloon and the Sorcerer threatens to kill them all.  The Wizard takes out a sword and kills him.


Anyone who has read the Oz series knows that L. Frank Baum takes the Dorothy character as far as he can and then gets rid of her - not by refusing her entry to the fairyland of Oz because she has grown up, as is so common in many stories of this type, but by having her move to Oz permanently.

The problem for the reader is that once in Oz she'll never grow older and reach menarche.


And Dorothy is only interesting as long as she has real problems to which real girls can relate.*


Luckily this story occurs before she is invited to live in Oz.


Here she deals with one of the biggest problems facing 11 year old girls  - an 'unreasonable' adult.


Note that she takes the grownup to task - and gets away with it.


"Why did you wickedly and viciously send the rain of stone to crack and break our houses?" he continued.


"Prove it!" cried the Sorcerer.


"We don't have to prove it," answered Dorothy indignantly. "If you had any sense at all you'd know it was an earthquake."

Dorothy 'rocks', as my students used to say.


The Wizard of Oz also 'rocks' in this book.


He admits he isn't much of a wizard, (father figure):

"No," answered the little man, you are quite right. In the strict sense of the word, I am not a wizard, but only a humbug."

But he understands that 11 year old girls, even as they take their first steps towards becoming women, still need protection.

So the wizard lost no more time, but leaping forward he raised his sharp sword, whirled it once or twice around his head, and then gave a mighty stroke that cut the body of the Sorcerer exactly in two.


He is the archetypal 'good father', guiding, advising, encouraging, protecting - but not controlling Dorothy.


He's come a long way from his days as 'Oz the Great and Terrible' in the first book.

These chapters end with the burial of the dead sorcerer who appears to more vegetable on the inside than human.


*Dorothy appears in later books but usually in a secondary role. L. Frank Baum introduced other much loved characters like Betsy Bobbin and Trot to take Dorothy's place.

Posted by The Episcopagan at 12:57 PM

Email ThisBlogThis!Share to TwitterShare to FacebookShare to Pinterest
Labels: analyzing Oz, Dorothy and the Wizard in Qz, girls and their fathers, The Wizard of Oz, young girls and the Oz books

This is a fascinating interpretation - being honest, I'm afraid I tend to read children's literature too literally - not delving into the deeper meanings.

Love that Dorothy is a little cheeky :) Also, the word 'humbug' - which always gives me a chuckle.

Probably a wise move not to analyze too closely, just enjoy. Unfortuantely I can't help myself, I analyze things to the nth degree :)

And I was going to blog less this summer... sigh.

I read a psychologist's analysis of cartoons and children's stories and it made my hair stand up... ruined it for me a little.

Sometimes I analyze things too much and it ends up exhausting me. Keep it simple, I tell myself, and take it at face value.

I also love that Dorothy is a little cheeky. My type of person.

When I was a kid and read The Wizard of Oz, the word "humbug" really threw me. I only knew it as the name of a candy. Speaking of which, it's been forever since I had a humbug! Do they still even make them?

I enjoy analyzing stories,although we shouldn’t make children scrutinize them. Just let kids enjoy the story and leave them alone!

The Wizard of Oz is my metaphor in many aspects of life.

Humbugs are available in Walmart - along with everything else in the physical universe, Debra She Who Seeks.

Yes, I suspect L. Frank Baum was tired of the Dorothy character, Debra. I wouldn't say she had any intense emotional struggles though.