H1N1 flu was not particularly harmful to humans, but boy, it sure decimated the doctor's office magazine population.


Post swine flu, my own doctor's office is as small and bare as Old Mother Hubbard's cupboard.


And efforts to repopulate the area have met with little success.

I mention this because today's post is a recipe and I found it in an old Chatelaine Magazine, you guessed it, lying around my doctor's office.

I mourn the end of an era
and dedicate this post
to the memory of all magazines that have been sent to the recycling plant
rather than being allowed to live out their days
in a warm doctor's office somewhere. 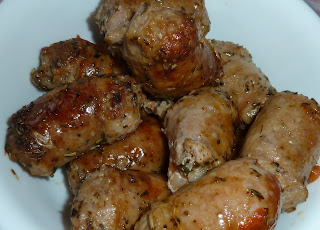 
8 tomatoes
1 sweet onion
2 hot Italian sausages (omit if you are a herbivore, it still tastes great)
1 head of garlic
1/4 cup of olive oil
1 tsp salt
2 tsp Italian seasoning
1/2 tsp smoked or regular paprika
10 oz can of chicken broth (herbivores use veggie broth)
sprig of fresh thyme or basil (like you are going to spend 5 bucks on a bunch of fresh thyme so you can use one sprig, eh?) 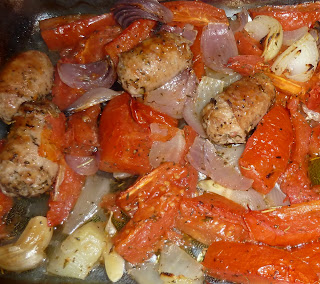 
- preheat oven to 450
- have your oven racks in the top and bottom third of your oven
- cut tomatoes and onions into wedges
- slice sausages into quarters
- slice of the top of the garlic and discard the loose skins
- tumble the vegetables, garlic and sausage into two large rimmed baking dishes
- drizzle with oil and sprinkle with dried seasonings
-stir

stir and rotate about half way through 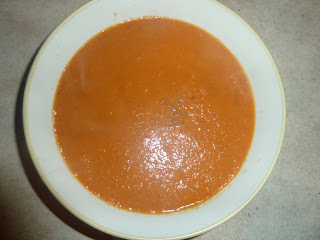 - Put tomatoes and onions in a food processor, squeeze in garlic and discard the skin

- put a little broth in the baking dish and scrape up the brown bits, put them in the food processor
- pour the tomato mixture into a sauce pan and add the remaining broth
- bring to a boil 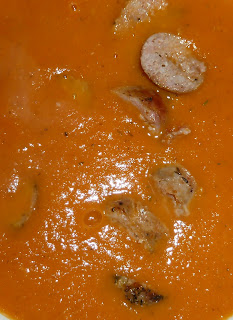 - slice the sausages and scatter on top of the soup
- gobble it up
*
This recipe makes about 4 bowls of soup.  I kept my snarky comments to a minimum and tried to post the recipe just the way it appeared in the magazine.
I bought all of the ingedients, except the garlic at Rick's Country Deli on Quaker Road in Pelham.
*My name for the soup. I have no idea what Chatelaine called it.
Posted by The Episcopagan at 8:07 AM

I thought it looked delicious until you ground it up into a soup! The tomatos, onions and sausage over rice or in a sandwich would be delicious!

That would be yummy, too! Something about lean times in February and craving fat, I guess.

Funny sign at my Physiotherapist's office: "Please do not rip pages out of magazines. If you would like a recipe, let us know and we will photocopy it for you." I thought it was a joke, but apparently it is a big problem. They put up the sign after they got a brand new magazine and a patient ripped out SIXTEEN pages!!!