February - a Month to Die For 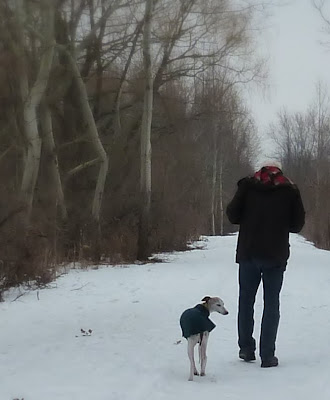 "February is a suitable month for dying..."
- Anna Quindlen, One True Thing


I knew that one of his dogs had died when I saw this old fellow on the trail a few days ago.

In the past he has  always been accompanied by an Irish wolfhound
and the whippet you see in the picture.

For some reason the male wolfhound at about 200 pounds and my dog Flynn,
a 15 pound alpha female, hated each other on sight.


Anyway, I told him how sorry I was and he nodded sadly. 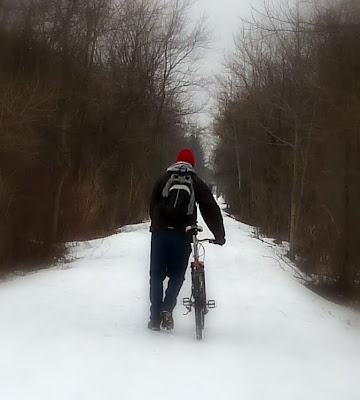 "There seems to be so much more winter than we need this year."
- Kathleen Norris

The thing about February is that everything isn't always what it seems.

It looks as if this young fellow, who was kind enough to stop and pat Flynn, might be one snow block short of an igloo the way he's rolling a bicycle down a snowy path.

The truth is that the roads were absolutely clear and dry that day.
Perfect for biking if you were dressed for it.

He was likely just taking a short cut home from school.

And anyone who wears a bright red toque and pats my dog is okay in my books.

"Late February,
and the air's so balmy snowdrops and crocuses
might be fooled into early blooming.
Then, the inevitable blizzard will come,
blighting our harbingers of spring..."
- Gail Mazur
﻿

Yesterday I was given this bundle of unusual black pussywillows
that had been found down by Lake Ontario .

It was a beautiful day.
The first day I had been able to wear shoes rather than boots in months.

Today a February winter storm rages outside my window.

"Winter is nature's way of saying, "Up yours.""
- Robert Byrne


﻿ And geese are Niagara's way of saying "Up yours" to winter.


They V up in the fall and look like they are going someplace,

flapping and honking across the evening sky.

But they never really leave.


It is all for show.


They know we like to see them do it I guess.


Mid February Flynn and I spotted this flock happily paddling around in the Welland Canal. 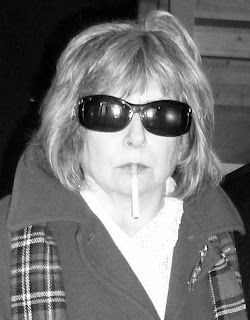 "Why, what's the matter,
That you have such a February face,
So full of frost, of storm and cloudiness?"
- William Shakespeare, Much Ado About Nothing


February is also the month that


She promised to open all of the community schools that have been closed in Niagara.

the Board of Education.


to make up for all of those years when women didn't have the vote,

she believes that women should be able to vote twice.

I don't know about you,

(the only candidate who looks like a cabinet minister),


Hang on everybody, it is the last week of February and we're almost there!

"Secnarf" certainly has my vote. If Boards of Education have no transparency and no accountability to residents, then out with them! Let's put the money into front line services.