Christmas is all about the birth of the baby Jesus, right?
So you wouldn't expect to find sculptures of the Holy Family in cemeteries, cemeteries being all about death, not birth, right?
They  do show up however, and in light of the Christmas season here are a few versions of the 'grave' Holy Family. 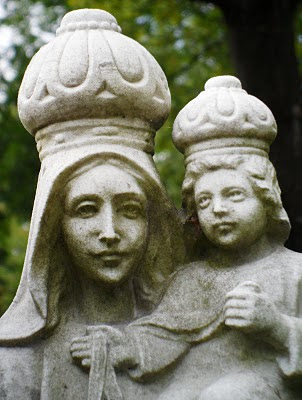 At this tomb Mother and son wear magnificent crowns.

Jesus is looking upwards - to heaven I suppose, but He gives me the impression that He is trying very hard to keep the crown balanced on his head.


Mary looks strained. Like most mothers she is weighed down with responsibilities

- never mind the part about being the Mother of God. 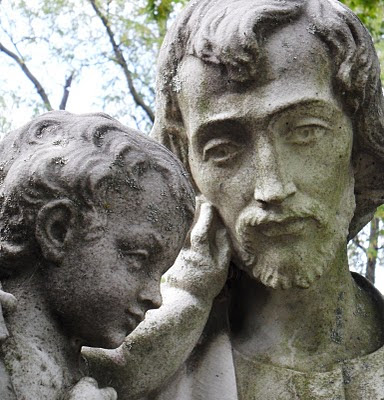 Anyone who knows the story would understand that Joseph's existential moment here is not just for the person whose burial they are attending, but also for his son.

This baby Jesus rests a hand on his father's cheek to comfort him and gazes sympathetically at the mourners. 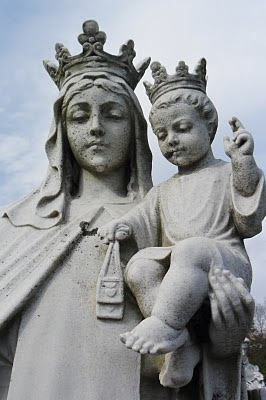 Mother and son look down from the sky at the grave of the person whose burial they have been called to attend.

Such an implacable look on Mary's face. She knows that the fate of the deceased is out of her hands now.

Jesus, although still a toddler, blesses the body.


It almost looks like a formal departure at a train station. 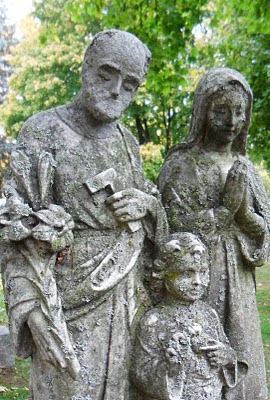 The Holy Family has gathered for a burial in Thorold and Joseph, the old man, is chilled at the thought of death. We see it in his face when he looks directly at the camera.
Mary, is lost in prayer. Unlike her husband, she has no doubts about the soul's journey through the afterlife.
Once again, Jesus raises his hand in a blessing.


And just because it wouldn't be right not to include one, 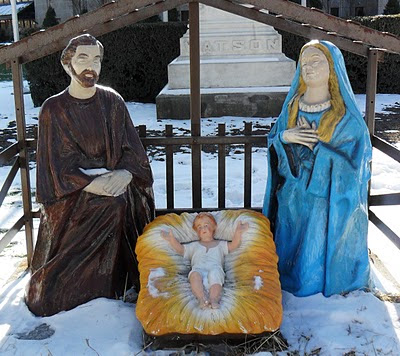 Here is a picture of the traditional Christmas creche that stands outside of St. Catharines City Hall.


Enjoy these last few weeks before Christmas, everyone!

Posted by The Episcopagan at 8:45 AM