The Red Fleurs of Quebec 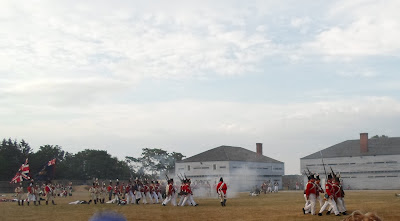 Since 1759 we've liked our Quebecers French.


But not too French.


I mean we want them to change their laws


and get those road signs en anglais aussi


so we can look like we know where we're


going when we visit, eh?


But if they won't change their signs, well,


we don't go there that often anyway


language is a big deal.


And maybe we should be paying more attention.

If you live in Ontario you've probably met some people


who used to be a part of the Anglo community in


Meanwhile inside Quebec the struggle for justice


and a unified country goes on


by people who believe in Canada.


And I'm afraid that if it isn't our battle now,


it will be when the next referendum rolls around.

For a grassroots commentary from the Anglo community

I always wonder what would happen if Quebec did separate from Canada. I guess that won't happen especially with a powerless Bloc Québécois

I always find it so interesting when countries want to "separate"...

Like that old joke says -- if Quebec separates, it will be a faster drive from Ontario to the Maritimes!

I don't mind Quebec becoming its own country. If the people there really want it, I see no reason why it shouldn't happen. Thing is, I don't see it happening any time soon. Or ever.

I'm tired of Quebec constantly threatening to leave in order to get rights that other provinces to not have, while receiving funds from those same provinces.

This sounds so much like an old couple yelling at each other, and one reminding the other that even though s/he hasn't left in the last X number of years, today is the day. But everybody knows it won't happen... maybe.

the only news I get about Quebec is from your blog...

Hi Francie! I'm still catching up as you can see. The whole Anglo/Franco struggle has been uncomfortable for me. As an English speaking Canadian it has always maddened me that Quebec is French speaking only, but the other provinces are bilingual. I tried to learn French but it was very difficult, and some of the time I to take it by correspondence ~ no Rosetta Stone then. But as a teacher I have always pushed parents to make sure their children become literate in their native languages. And the USA will eventually go bilingual like Canada with Spanish. It's inevitable, and it's being driven by $$$ to be made. I think educated people must be bilingual, and I am so proud of my Canadian nieces and nephews who are fluent in French, One of my goals in retirement is to go back and learn French properly. I need more hours in my day! You, too, like to broach uncomfortable subjects in your own articulate way! Thank you!

Why can't we all just get along?