Secnarf - The Only Candidate Who Looks Like a Cabinet Minister 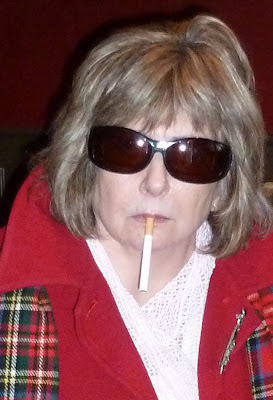 
A while back, Secnarf the Independent Rhino candidate from North Pelham took over my face book wall during the controversy over the opening of the DSBN Academy in Niagara. I thought I would check in with her again because of the upcoming Federal election. This is a transcript of our interview.


Francie: Let's start with your political affiliation. You do know that the Rhinoceros Party of Canada is defunct?

Secnarf: It exists in the hearts of all true Canadians.

Francie: Those old enough to remember it I suppose.

Ayway, there is a rumour going around North Pelham that you bought a cigarette from Betty McGlashan for a looney so that you could look tough like Minister of International Cooperation, Bev Oda.

Secnarf: It is a lie. I offered her a looney but she gave it to me for free.

You have said that if elected you will allow women to vote twice to make up for the years when they weren't allowed to vote at all and you have promised to take all of the calories out of chocolate cake.

Do you have anything else to add to your platform as we move into the next Federal election?

Secnarf: Yes, if I am elected I promise that I will move the head office of Bell Canada to North Pelham so that the CEO and other top Bell Canada executives can enjoy the same dial up Internet service that we rural Canadians enjoy now.

Francie: Not only are you dressed like a pirate, your t-shirt says, "Pirate Party of Canada."

Secnarf: (holds up a mirror) Jeesh. This happens whenever I talk about Bell Canada.

Francie: Well I have to run. Thanks for your time, Secnarf.

We'll be in touch throughout the election.

Any last words for today?

Secnarf: Yes. Can I have my pirate hat back?


Vote Secnarf
The only candidate who looks like a cabinet minister

Posted by The Episcopagan at 8:43 AM

If you're up for a bit of investigative reporting, I have it on good authority that Secnarf used to smoke, drink, and dance the hoochy-koo.

secnarf ... not only smoked, drank, and she has done more than danced the hoochy-koo!!! .... i can bear witness to some of her other lost talents

Secnarf says she still drinks, smokes and does the hoochy-koo. Just a little slower than she did in 1969.

Secnarf, you DO look remarkably like Bev Oda but you must lose the red jacket and dress all in black if you want to look as tough as her. And yes, I remember the Rhino Party well . . . .

When I gave Secnarf your message, Debra, she said "OH!" and took off in her 1981 Mustang. I assume she's gone shopping.