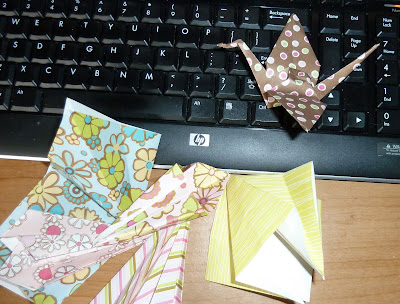 Anyone who has wept over the true story 'Sadako and the Thousand Paper Cranes', by Eleanor Coerr knows the Japanese legend:

If you make a thousand paper cranes your wish will come true.

The first time I read the story to a grade five class, my students were so moved by ten year old Sadako who died from the effects of the fallout, (i.e., leukemia), after World War II, they decided to organize a school wide Remembrance Day project that would involve making and sending 1000 paper cranes to the Peace Shrine in Hiroshima.

You see, Sadako's wish was to live. She made 644 paper cranes before she became too weak to fold the paper.

After she died her family and classmates finished her task and buried the 1,000 cranes with her.

One thousand paper cranes is a lot and some of the ones from my school were made by such tiny fingers, I was worried that the people in Hiroshima would be offended.

But of course they understood, children from around the world were sending them paper cranes because it was 1984 and the Doomsday Clock was set to 11:57 p.m.*

Then, miraculously, within a few years of thousands of 'peace' cranes arriving in Hiroshima, the Cold War was over and the Doomsday Clock was set back to 11:43 p.m.

The logical conclusion is that the legend of the paper cranes is true.

* The Doomsday Clock is a symbolic clock face, maintained since 1947 by the board of directors of the Bulletin of the Atomic Scientists at the University of Chicago.

Posted by The Episcopagan at 4:42 PM

Thanks Debra She Who Seeks, every morning I get up and hope to read that things are better in Japan. Maybe soon.