I was really intrigued by a letter to the editor that appeared June 7th in the St. Catharines Standard. R.D. Bowman asked why the G20 Summit Meeting, which is scheduled to take place in Muskoka, Ontario, later this month, isn't being held in the Diefenbunker.

For non-Canadians or people under forty-five who happen to read this, the Diefenbunker was a top secret facility built at the height of the Cold War to house Canada's top politicians and military personnel in the event of a nuclear attack. The name Diefenbunker comes from the name of John Diefenbaker who was the Prime Minister at the time.

I have to tell you that I did not know that Diefenbunkers existed until a few years ago. (I say Diefenbunkers with an 's' because I just read that there are quite a few of them spread around the country, most located near major cities. The main one, an underground four storey behemoth, is located outside of Ottawa and is now a museum.)

Maybe it's a good thing that I didn't know because at times it was darn scary growing up in Niagara during the Cold War. Air raid sirens were our occasional creepy lullabies and we were taught to duck and cover from our first days at school. The fear of a Russian missile attack on the hydro electric power plant at Niagara Falls was palpable for years.

But I digress. Sorry. Back to my topic.

R.W. Bowman says that we may end up paying more than a billion of our tax dollars to protect 20 people and their entourages during the G20. Ouch!

He says the main Deifenbunker was built to accommodate 256 Members of Parliament and their families for weeks and could have been easily used by the Summiteers at big savings to us. R.W. Bowman has a point and it's a shame it won't happen because, financial reasons aside, there is also the small matter of the Diefenbunker's address.

This is where the most powerful, cantankerous politicians in the world should meet.

The main Diefenbunker is located on Carp Street in Carp, Ontario. 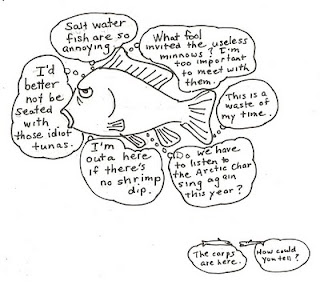 Posted by The Episcopagan at 8:13 AM