The Death of Johnny Two Rivers 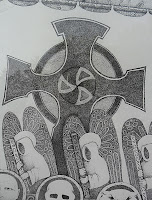 My last blog got me thinking about Christianity and from there I started thinking about something that happened a few years back when I was teaching in Dawson City, Yukon.

There were only about 500 people living in Dawson when I was there. For excitement we occasionally took a trip down the Klondike Highway to Whitehorse. Depending on the weather and who was driving the trip took anywhere between 8 and 12 hours. If possible we drove in a convoy. The highway was a dirt road, the conditions could be treacherous and you never knew what could happen.

On one trip back we were surprised to see a woman standing at the side of the road, crying and waving her arms at us to stop. We were a little north of Carmacks, which is maybe about 1/5 of the way to Dawson and like most of the Yukon it was complete wilderness on both sides of the road.

I can't remember how many vehicles were with us but we all pulled over and followed her into the bush. Her father wasn't well she told us and she didn't know what to do.

When we arrived at their fish camp, it looked as if the old man's time was over. It was Johnny Two Rivers, a well respected Yukon elder. He was lying on a blanket on the ground, he looked comortable but he wasn't conscious and was having difficulty breathing. There wasn't much we could do for the old fellow so we were standing commiserating with his daughter when there was a sudden disturbance in the bush behind us.

Now I wouldn't have been too surprised to see a bear wander into their fish camp or even a few Russians who had made a wrong turn somewhere up near Tuktoyaktuk but I totally taken aback to see a group of young white people suddenly appear out of nowhere and race at full speed toward us.

The man in the lead screamed, "Stop! Don't anybody touch anything! I'm a Christian!"

By the time it had registered that he hadn't said doctor, he had thrown himself on the dying old man, and was shaking his fist at heaven (?) and shouting," SATAN, I COMMAND YOU TO LEAVE THIS MAN!"

In the next instant while the exorcist was still doing his thing, and we were all standing around dumbstruck, a small car appeared at the camp. I have no idea how they managed to get it so far into the bush. They literally stuffed the unconscious old fellow into the car with his daughter and they all took off back to Whitehorse in a cloud f dust.

It happened so fast and was so strange and even violent that I have never forgotten it.

We wandered sadly back to the road and our vehicles and continued on to Dawson City. I heard on the radio the next day that Johnny Two Rivers had died in the hospital in Whitehorse. I'm sure the old man would have preferred to die at his fish camp.

It was as if we had witnessed a five minute lesson on the history of the dark side of Christianity.

Sigh.
Posted by The Episcopagan at 8:56 AM

Amazing story. So many unanswered questions.

Yes and in all my years in the Territory I never heard anything more about that band of strange Christians.