I saw a cartoon a few years ago that, at the time, struck me as very funny.

Two old guys were sitting in wheelchairs in an old folk's home. One said to the other, "Just think, If I hadn't quit smoking thirty years ago I would have missed all of this." 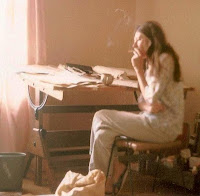 I decided to quit smoking in the early 1980s. The first strategy I tried was called, 'total humiliation'. It can only be used by teachers, but I suppose it could be adapted to any workplace or household where there is a captive audience.

I was teaching grade four and as a math problem, I had my class work out how much money I was wasting on cigarettes each year. We also estimated how much I had spent since I started smoking at age fourteen. Even in those days when a pack of smokes was relatively cheap, it was a staggering amount. We all decided what we would buy with such a large amount of money. To this day I can still see the looks on their little faces.

They thought I was a total dunderhead.

For an addict, humiliation and shame only last as deterrents for so long. I soon had to implement the second part of my campaign which was the 'alternative medicine strategy'.

Acupuncture was right up there with witchcraft as far as health care went in those days, but I was desperate. It cost me $15. The acupuncturist, who was also a physician and the rather unusual Mayor of Whitehorse, gave me a great big vitamin B shot along with the acupuncture. It worked. I went home from his office feeling free for the first time in years.

As a last resort I launched stage three, 'the dangle a carrot in front of your nose strategy'. I promised myself that it wouldn't be forever. I would light up again on my 65th birthday.

I can start smoking again in four years and the closer it gets the more attractive the prospect of becoming a born again smoker becomes. That cartoon about the ex-smoker in an old folk's home isn't funny anymore . I'm willing to forgo the dementia and incontinence of old age and help ease the health care crisis of the 2030s - but guess what? I can't afford it.

Do you know how much a pack of cigarettes costs these days?

Jeesh!
Posted by The Episcopagan at 12:45 PM