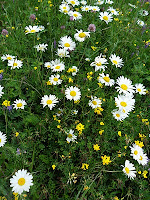 By September of 1983 I had been teaching grade five in Dawson City, Yukon for several years. I was in my early thirties and single. The north can be a lonely place for an unattached person so I was quite interested when a fellow teacher told me that her friend, John, had asked her to find out if I would go out with him.

I knew him slightly. It is hard not to know someone when there are only 500 people living in an isolated community. He was my age - a tall, bushy haired, bearded carpenter who did some exquisite cabinet work for people around the Territory.

I told her that I would.

I waited, quite nervously at first, for him to call. When he didn't I started showing up places where I knew he'd be, smiling like an idiot and generally trying to look approachable. It was a lost cause.

Eventually I gave up. Women weren't as assertive in those days as they seem to be now. I went back to my usual life of socializing with the teachers and watching Dallas. Winter slowly disappeared from the Klondike Valley, the ice went out of the rivers, the sun came up and didn't go down and tourists started to reappear.

One Saturday night in May I was caught in a crush of people at one of the local watering holes that was having its grand opening for the summer season. Quite by accident I found I had been pushed against John. We laughed about it and after all that time something clicked.

But it was close to the end of the school year. I was busy with report cards and with planning a trip to B.C. and Ontario to see my family as soon as school ended. We managed to see each other whenever there was time. I wasn't worried, there was always the long winter to get to know him.

The night before I left we had dinner at the Midnight Sun Restaurant. It was a wonderful Yukon evening full of good food, good wine, strange characters and plenty of laughs.

But it was the last time I saw him.

John died in a car accident just outside of Dawson City a few days later on Canada Day .
Posted by The Episcopagan at 8:26 AM