The Separatists Wore me Down

The Separatists wore me down.
I remember what a jolt it was the day after the first Referendum
when the sun came up.
I hadn't paid any attention to anything except Quebec in such a long time
that it
was a surprise to see that everything was so ordinary.
The Federalists had won, narrowly.
The next Referendum caused anxiety but also a rising anger.
And since that time I have  just become more and more tired of the news
coming out of Quebec. The language laws,
the return of the Parti Quebecois
and the threat of another referendum.
"If they want to go, they should go.
In this day and age we can survive without them," I reasoned.
I was just tired, tired, tired of it all.
Then I went to Ottawa for the Remembrance Day week-end.
***

In Ottawa I saw some of the things that bind us together.
﻿
﻿
Our connections with each other and with our history. 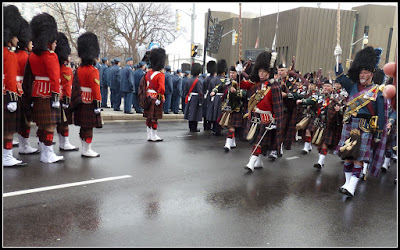 Our connection with Britain and the Commomwealth.
No one could walk through the Museum of Civilization,
(Museum of Canadian History), and the National War Museum
and not feel that the country must be preserved.

Each generation has had its struggle, its burden.
Ours has been to keep the country together.


I won't let them wear me down again.

Posted by The Episcopagan at 11:02 AM

Watch out, separatists! Glad you'll be on our side to kick some butt if need be, Francie. But keeping a country together is like keeping a marriage together. It really only works if both people want it to. If one wants out, then the marriage just becomes a burden for both.

Great post, Franice. And I agree with what you've written, but only if both parties want to stay together. Like Debra says, this is like a marriage. And as you know, staying together for the sake of the kids if one party wants out, doesn't work out well for anyone. So if Quebec really wants to leave, we're going to have to let them go. Personally, I don't think they will. There are too many (financial) benefits to staying in Canada that they won't give up. But we'll see.

Glad you're back onside, Francie.

I'm not saying the Federalists will win. I'm saying I'm not going down without a fight.

Before this post I never gave it much thought...but this was a powerful post, and I agree with you!