McClintic, Rafferty and the Death Penalty 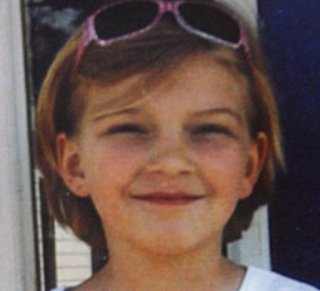 Last week I was appalled to read that more than half of Canadians would like to see the death penalty brought back.

This week I learned what happened to sweet little Tori Stafford.

Tori Stafford was an eight year old Ontario girl who was abducted by an 18 year old junkie named Terri-Lynn McClintic for  her 31 year old boyfriend, Michael Thomas Rafferty.  After the punching, the stomping and the  brutal rape by Rafferty, the junkie bashed Tori's head in with a hammer.

The death penalty has been on my mind ever since.

Should it be reinstated?

I would still vote against it.

But I will tell you that if the government announced today that they were making an exception in this case  and McClintic and Rafferty were going to be put down like sick animals - I wouldn't be at any jailhouse protest marches.

They do not deserve to live.

Posted by The Episcopagan at 8:58 PM

Yes, that's a terrible case. We have another horrible one being tried here in Alberta at the moment too, involving a mother who drowned her two little boys. The details of both are so distressing.

But I also continue to support Canada's decision not to have the death penalty. We have too many cases of wrongful conviction in this country. It's one thing to let someone out of jail and compensate them for 20 years of wrongful conviction. It's another thing when they've been executed -- too late then to say "oops, sorry."

I have been sickened ever since reading the (published) details of this case. Horrific. These two are monsters and I truly don't understand how people like this can lay their head on a pillow each night and actually sleep (the sleep of the damned). Like you I'd love to see an exception in this case, but I agree with Debra that the numerous cases of wrongful convictions cannot be ignored and I would have to vote no.

That story really upset me. I think when we hear about things like that, it's natural to have a knee-jerk reaction about the death penalty. We are so outraged and sickened that we want these people to pay. Dearly. But then everyone calms down and we go back to our original position, which is gainst the death penalty. At least the majority of the people.

I read about this case last week and it is truly distressing. I don't know what the prison system is like in Canada, but here the general opinion is that prisoners have it too easy. So whilst I don't in general agree with the death penalty, I do think prison shouldn't be any easy ride, and people like these two should never be freed.

So these 2 should be allowed the privilege to live albeit behind bars? Really?! They will still get to communicate, feel, eat, grow old? Yes there are those cases of wrongful convictions, but in this case - when there is no doubt - she has admitted her crime - she will continue to "live". This is not justice.
So glad that Karla Homolka walks amoung us, lives her life, is a mother. How would she feel if someone did to her life what she did to French and Mahaffy's families. This is a sad world we live in.