The Country That Doesn't Forget 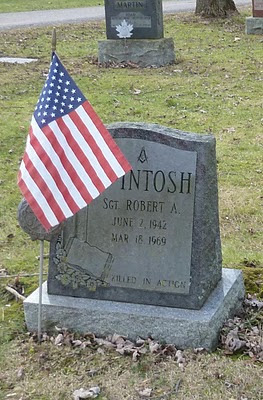 I go to the old cemetery in Thorold, Ontario, not just because so many family members are buried there or because it has interesting headstones, I also go to let my dog run.

There aren't many recent burials as a new section was opened a while back so Flynn-the-dog and I rarely see anyone else.

During our last solitary walk I came upon this grave by accident.

I actually knew it was somewhere in the cemetery.

Robert McIntosh was the son of my father's cousin and as things happen in small towns I knew him when I was a kid and he was a skinny nice looking teenager.

But his father got a job in the U.S. and the whole family moved Stateside.

Not much was said about the chance the family took until Robert was killed in Viet Nam.

He died over forty years ago.

His parents returned to Canada with their son's body and are buried on his left.

There are no immediate family members left to tend his grave.

You might think that his resting place would only be noticed by people like me, distantly related who happen to be wandering through the old cemetery reading headstones.

Until you notice the crisp new American flag and the crest that must be the insignia of his military unit.

I was deeply touched.