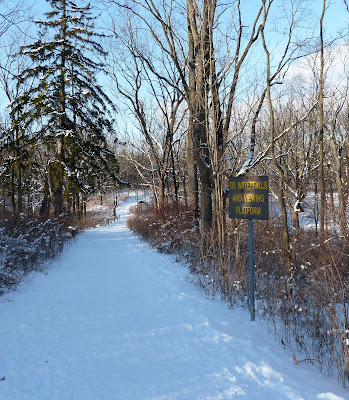 "Antisthenes says that in a certain faraway land the cold is so intense that words freeze as soon as they are uttered, and after some time then thaw and become audible, so that words spoken in winter go unheard until the next summer."
- Plutarch, Moralia

Frozen words caught in tree branches, or piled up at the side of the road by snow ploughs.

In January a person could literally 'trip' over his or her words. 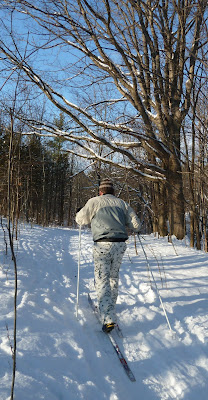 "... People hit the sauce in a big way all winter. Amidst blizzards they wrestle unsuccessfully with the dark comedy of their lives, laughter trapped in their frigid gizzards. Meanwhile, the mercury just plummets, like a migrating duck blasted out of the sky by some hunter in a cap with fur earflaps. "
- Amy Gerstler, A Severe Lack of Holiday Spirit
Or they go skiing like this fellow with the fancy dancy pajama bottom  pants﻿, and ignore falling ducks in January. 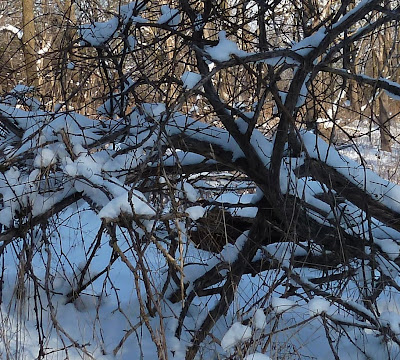 "There is nothing in the world more beautiful than the forest clothed to its very hollows in snow. It is the still ecstasy of nature, wherein every spray, every blade of grass, every spire of reed, every intricacy of twig, is clad with radiance."
- William Sharp
﻿
Not much I can add to that.

Sunday was a sunny day and although it was a January finger numbing cold, the park was beautiful. 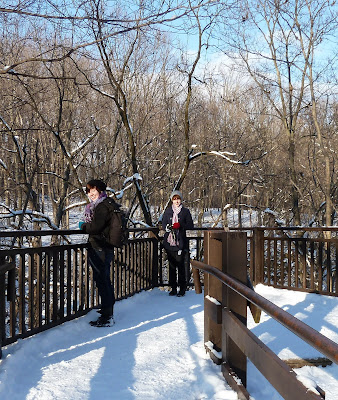 "Spring, summer, and fall fill us with hope; winter alone reminds us of the human condition."
- Mignon McLaughlin,


I found these two girls at the Swayze Falls viewing platform.  They were laughing and taking pictures of each other.  Sometimes the human condition isn't so bad, even in January. 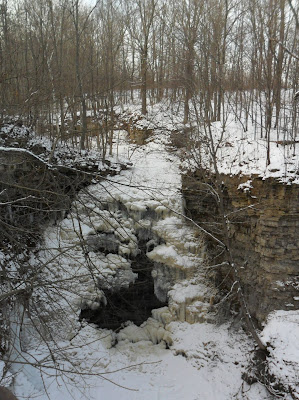 "To shorten winter, borrow some money due in spring."
- W.J. Vogel
﻿

If you are not in danger of being kneecapped by the local loan shark in the spring, during the middle of January it may seem like a long, long time before the water at Swayze Falls will run free again and cascade to the rocks below. 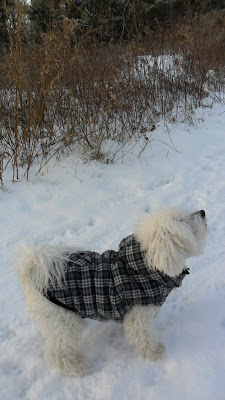 Posted by The Episcopagan at 8:24 AM

Honoring the richness of darkness (winter) and the reemergence of the light (spring)... promises renewed spirit and purpose.

Such gorgeous scenic pictures bringing familiar, visual memories of winter in the Niagara area. Not that we don't get some beautiful winter days here ... but different - farther and fewer between.