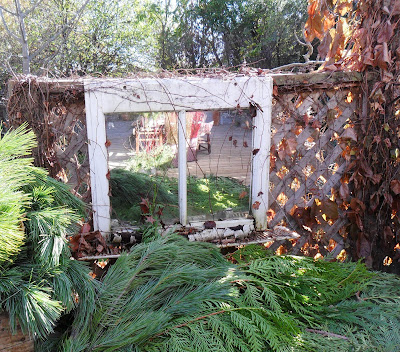 "The gloomy month of November, when the people of England hang and drown themselves."
- Joseph Addison
Well that isn't much fun, is it?

In Canada, we made our peace with winter long ago. Instead of what are evidently common British activities in late fall, Canadians go to Christmas bazaars!

I don't know about you, but I prefer the Canadian way.

Anyway, I was at a sale of Christmas crafts at a home in Niagara-on-the-Lake last week. It took place in a most enchanting and whimsical November garden.

These are a few of the pictures I took. 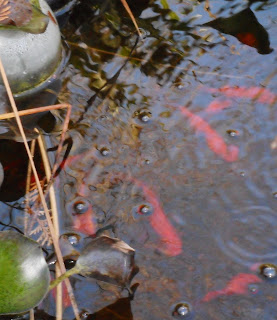 "November always seemed to me the Norway of the year."
- Emily Dickinson
Jeesh!

Even the Americans have a thing against the eleventh month.

Anyway, too bad, so sad for Norway, but hey, Canada, gray skies and drizzle didn't make her think of us!

I suppose we are the Miss January of Emily Dickinson's calendar, but we'll cross that bridge when we get to it, okay? 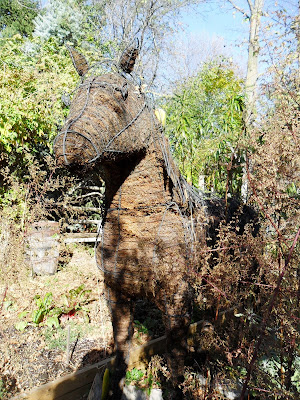 "The acrid scents of autumn,
Reminiscent of slinking beasts, make me fear"
- D. H. Lawrence, Dolor of Autumn, 1916
It was quite startling to find a life size mare standing hidden and watchful in the brown November garden.
I approached the armoured creature with care and she kindly allowed me to take her picture. 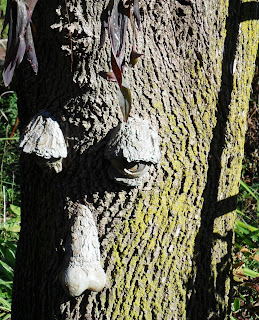 "When I look into your eyes
I can see a love restrained
But darlin' when I hold you
Don't you know I feel the same
'Cause nothin' lasts forever
And we both know hearts can change
And it's hard to hold a candle
In the cold November rain."
- Guns N' Roses, November Rain


I could feel his eyes on me long before I saw where he was standing.  Tall and about my age, I thought he was most attractive.

I tried to strike up a conversation, but he said not a word.

Me thinks he had a wooden heart.

See you Monday?
(Or maybe Sunday night which is when I usually post Monday's blog, which I suppose technically mkes it my  Sunday night blog ... hmmmm.)
Posted by The Episcopagan at 5:53 PM