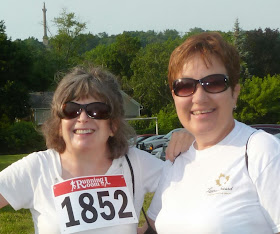 It's the 200th anniversary of Laura Secord's famous walk
through American lines to warn Lieutenant FitzGibbon of
the impending attack!!

My friend Jane and I decided to follow Laura's trail.

We've been friends since we were 8 years old and we are
both descended from people who lived through the turbulent
War of 1812 and the occupation of Niagara. 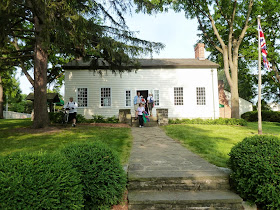 The trek started out at Laura's homestead.

This was where she and her husband overheard the American
officers discussing the attack.

Laura's husband had been wounded in the battle of Queenston
Heights and could barely hobble so they decided Laura would
have to warn FitzGibbon who was camped about 30 km away. 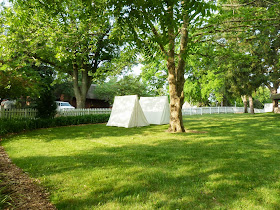 We noticed Yankee tents are set up on Laura's yard. 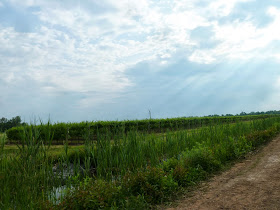 We set out on the trail.

When Laura started out right about here she would have
been fairly safe.

The danger came after curfew when she would have been shot
if she had been captured. 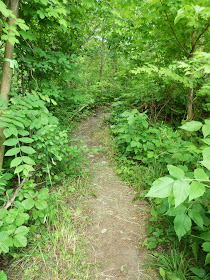 The trail is very lush because of all of the rain.

Laura would likely have had an eye out for snakes but
the last rattler was seen in these parts in the 1940s
so we didn't  have that problem.

Our greatest worry is the fearsome tick! 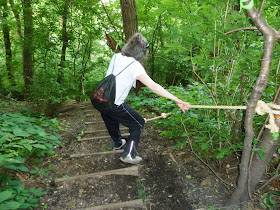 Getting up and down the Niagara Escarpment couldn't have been easy
for a woman in a long dress, flimsy shoes and no map or signs to show
the way.

Here I am using a rope to come down a steep incline.

This is the point where I lost my camera.  Missing a whole bunch of shots
here, especially when we met up with Isabel, our old school mate, who was
posted at one of the check points.  The next few shots are from my cell phone.
Fortunately someone found it and I got it back at the end of the day.
***

These two descendants of some of the men who actually
fought there met us just outside DeCou House. 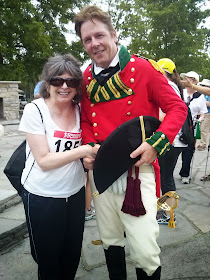 That's when I discovered the real reason Laura Secord went
to DeCou House.

Be still my beating heart!!

Lieutenant Fitzgibbon met all of us and thanked us for coming to warn them
of the attack. 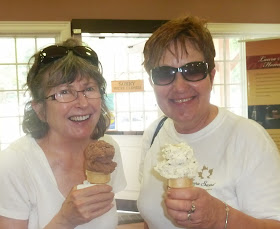 And this is how we ended our journey through time.