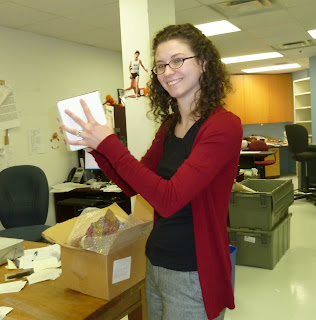 This is Bridgit.  She is my awesome supervisor at the Museum.

with whom Miss Eulalie will reside.

And the winner is 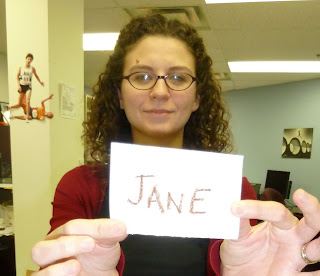 Jane's Jewels is a a unique,
sometimes mystical, sometimes amusing,
always fascinating blog that you can find on my sidebar.


The runner up was Janet for this written entry:


Tecumseh's father, Puckshinwa (Alights from Flying)  was married to Methotaske (One Who Lays Eggs In the Sand).
In 1759, Methotaske's band decided to move west into Ohio country.

"Not wanting his wife to choose between him and her family, Puckshinwa decided to travel north with her.

Tecumseh (Shooting Star)  was born in the Ohio region in 1768, thus being in the right place and time to help the British and Brock in the Siege of Detroit in 1812.


How great is that!

Because of Puckshinwa's romanticism (perhaps???)  Canada became what it is today!

What an entry!  Thanks, Janet!

Jane, send me your address and I'll get Miss Eulalie, her activation spell
and chocolate out to you asap!


Thanks to everyone who entered.

Wish I had a Magic pig wand for everyone.

Posted by The Episcopagan at 1:27 PM

Congrats, Jane! And Janet, I like that Tecumseh's name means "shooting star" -- how lovely.

Whoo hoo!! I rarely to never win anything - maybe my luck is changing and I should pick up a lottery ticket along with some more chocolate, hehe! Once I am in possession of The Wand, how long will chocolate be rendered calorie-free for? Congrats to Janet, your entry was a clear winner in my mind :)

Jane, Miss Eulalie is good for as long a pigs live!