It was a windy, cold, wet Saturday and I could see that the purple martins were in great distress, swooping and buzzing as I pulled into the driveway. It didn't take long to spot the problem. Their house was lying on the ground. It had stood on a pole on the corner of this property for 25 years.

From about 2 p.m. until about 6 p.m. the birds sat in the driveway. They sat facing the bird house, perfectly still. It was very unusual behaviour and I wondered if they were in shock. 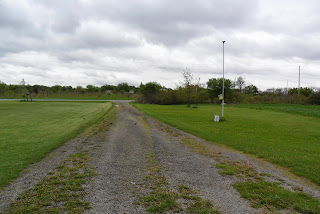 At one point I went out and set the bird house right side up again - the wind was still blowing hard and had upended it again.

The martins flew a short distance away but as soon as I left they took their positions again.

But there was nothing else to be done.

I came in and turned on my computer. Within minutes I had lost my internet connection.

Jeesh, what a crumby day.


There was a dead martin in one of the compartments of the bird house. It must have been inside when the wind tore the house from the pole.

I thought of David Suzuki's "A Murder of Crows". He spoke about the mourning that crows appear to go through when one of their flock dies. He described how they all gather in one tree near the body and spend a quiet, still time together.

I wondered if that was what the martins were doing yesterday. Do they understand death? How sad.

"Uh oh," said the guy at Niagara.com when I described my computer problem over the phone. "That doesn't sound good."

A few martins were still flying around the bird house when I left that morning with my computer strapped in the passenger seat of my spy car.

"Uh oh," said the guy at the Future Shop as I put my computer on the counter and described my problem. "That doesn't sound good."

The new martin house is up but there are no martins. The sparrows are really over the moon about their new digs though. The starlings tried to muscle their way into the neighbourhood and if I wasn't so anxious about the martins I would laugh about how the starlings steal stuff from the sparrows' nests.


The Future Shop called. When I took my computer in they told me I wouldn't have it back for at least a week and here it is, ready in 2 days and my warranty covers the cost!

Even though the weather is still crappy maybe things are looking up??

Woke up to find four male martins at the bird house roughing up the interloping sparrows and starlings. The weather is supposed to finally start to clear up tomorrow and they'll bring the girls back then I guess.

Now if I could just catch those no goodnik asparagus thieves...
Posted by The Episcopagan at 7:50 AM